DRACULA PRINCE OF DARKNESS On Blu-ray From Shout Factory 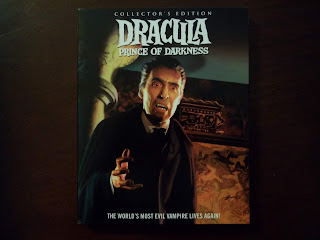 I got quite excited when I found out earlier this year that Shout Factory was planning on releasing a number of Hammer Films horror titles on Blu-ray. My enthusiasm was tempered a bit when it was announced that DRACULA PRINCE OF DARKNESS was going to be the first in the series. Nothing against the movie, mind you....it's just that I've purchased this movie way too often on home video.

I've bought DRACULA PRINCE OF DARKNESS as a VHS release (in widescreen) from Anchor Bay, then the Anchor Bay DVD, then as part of a 3-movie Hammer DVD set from Millennium, then a Blu-ray from Millennium, which I reviewed back in September of 2013. And that doesn't even count me taping it off of TV back in the 1980s, or the multiple times I saw it on Svengoolie during that decade.

Frankly, I've seen DRACULA PRINCE OF DARKNESS way more times than most people ever have, and I've spent more money on it than most people have. Do we really need another home video release of it??

Thankfully Shout Factory has attached some enticing extras for this version. First of all there's a limited edition 18 x 24 poster, which replicates the stunning Mark Maddox artwork that graces the Blu-ray cover sleeve. (I honestly don't know whether the poster is still available at this time.)

Shout Factory has also included what are essentially two different versions of this movie on the disc. There is a U.S. version of the film and a U.K. version. The U.S. version features the 20th Century Fox logo at the beginning and slightly different opening credit titles. The content in both versions is basically the same, but the visual quality of each is very different.

The U.S. version (which according to Shout Factory is a new 4K scan of the original film elements) has a darker, grainier look to it. It kind of reminds me of how the movie looked when I saw it on TV back in the 1980s (sans the correct aspect ratio, of course). The U.K. version is much brighter looking, and one can see much more detail in the sets and the costumes. This U.K. version looks about like what the movie looked on the Millennium 2013 Blu-ray.

Some may say the U.K. version looks too bright, and isn't very atmospheric...but after so many years of seeing DPOD with a dark, murky aspect to it, I kind of like the brighter version. No matter how you feel about DPOD's visuals, at least with this Blu-ray you've got two versions to choose from.

Most of the extras from the older DPOD home video releases are carried over here, including an audio commentary featuring Christopher Lee, Francis Matthews, Barbara Shelley, and Suzan Farmer (sadly Shelley is the only one of the group still alive now), and behind-the-scenes footage taken during production by Francis Matthews' brother. Particularly welcome on this Shout Factory release is an extensive stills gallery, which features a number of images even I've never seen before!

Shout Factory has also included two brand new (and welcome) audio commentaries. One features Constantine Nasr and Steve Haberman, and the other Troy Howarth. All three men are huge Hammer fans and their appreciation for DPOD comes out most effectively. Among the aspects the commentaries cover include why Hammer took so long to make another Dracula film with Christopher Lee, why Lee has no dialogue in DPOD, and Hammer's status as a company during the making of the film. Howarth's talk is particularly lively.

I assume that if you are reading this blog you probably have DRACULA PRINCE OF DARKNESS on home video already. I know a lot of movie buffs (like me) prefer not to buy the same movies over and over again, especially when one considers you could take that money and get something on home video you haven't owned before. Shout Factory has gone out of their way to give folks a reason to double-dip. I must admit that it was the Mark Maddox poster that swayed me in getting this Blu-ray. Even if you are not able to get the poster you still get two versions of the film and two new commentaries. Hopefully Shout Factory will continue to add new extras to their future Hammer releases (hint: more Mark Maddox artwork will be most welcome).