HORROR OF DRACULA On Blu-ray From Warner Archive 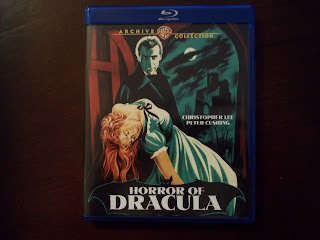 The Region A Blu-ray debut of the most famous Hammer film of all time has already stirred up a fair amount of controversy--so much so that I've debated on whether I should even write this blog post at all.

Instead of going into the history and/or the importance of the film, I'll get right to the point and give my personal opinion on how this movie looks on this Blu-ray.

Warner Archive claims that "This presentation of HORROR OF DRACULA is based on the British Film Institute restoration of 2007 and additional elements subsequently discovered." This restoration was the basis of a British Blu-ray release a few years ago that was accused by some as having a bluish tint to it. I don't have a Region Free player, so I haven't seen that release, but I have seen screen grabs from it and I don't think I'd like to see HORROR OF DRACULA with a bluish tinge.

The Warner Archive version of HORROR OF DRACULA does not have a bluish tinge--but it is, in my opinion, very dark looking. How dark? As an example, I'll use the famed fur-collared coat that Dr, Van Helsing wears in the film. The color of the coat is dark blue--but in many scenes it looks a solid black. Other dark-colored costumes and furnishings appear black as well, and the backgrounds of most interior sets are lost in shadows.

In certain close-ups there is an increased sharpness of detail--but the overall color tone, for me, doesn't seem as vibrant as I'm used to seeing on this movie. Does it look terrible, as some reviewers have said? Well, for me, it looks different.

I have the old Warners DVD of HORROR OF DRACULA, and I've seen it several times on TV over the years. Turner Classic Movies showed it in HD last October, and I thought it looked magnificent--the colors were bright and vivid, and there was plenty of sharpness and detail. I wish that version of it had been released on Blu-ray--and I honestly prefer the color scheme of the Warners DVD to the Warner Archive Blu-ray.

I have to point out that how I feel about the look of HORROR OF DRACULA is just my personal opinion--I'm not going to presume to say how the movie should "officially" look. I wasn't around when it was originally released in theaters in 1958.

Some other things about this presentation....the 1958 version of the Universal-International logo is at the beginning and the end of the film, reminding us that in America HORROR OF DRACULA was released by Universal (a fact that seems almost forgotten by now). The actual title of the film is the British one, DRACULA, due to the use of the BFI restoration. The thing is, this is an American home video release, so...wouldn't the HORROR OF DRACULA on-screen title be more appropriate?

The aspect ratio on this Blu-ray is 1.66:1, which makes the shot compositions look better (the Warners DVD was 1.78:1). The sound quality is excellent--the audio is in DTS 2.0 Mono, and James Bernard's score practically booms on it.

The only extra is an original trailer in very poor condition. Setting aside one's personal preference on how this movie should look, the lack of extras is the biggest letdown. HORROR OF DRACULA is THE Hammer horror film, and this year marks its 60th anniversary. Any home video release of it should include tons of relevant extras. I was holding out hope that because of the 60th anniversary, a company like Criterion might consider putting out HORROR OF DRACULA, but no such luck.

So, all in all, should one get this Blu-ray? I assume if you are a Hammer fan, you've probably pre-ordered it already, especially if you don't have a Region Free Blu-ray player. I don't really want to say "don't buy it", because this may be the only Region A Blu-ray of this film that will be released for awhile.

I will say, though, that this release could have been much, much better.
Posted by Dan Day, Jr. at 1:47 PM