A Tribute To Sylvester Stallone And Rocky Balboa 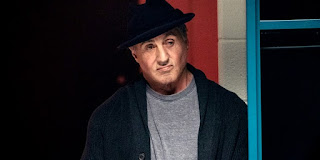 I watched CREED II yesterday, and I thought it was even better than the first CREED. It got me thinking about the entire Rocky film series--a series that has gone on for over forty years and includes eight movies so far. It's a series that has made a significant impact on pop culture, and with Sylvester Stallone recently announcing his presumed "retirement" from playing the Rocky Balboa character, I think it's high time to give the actor some respect for what he has accomplished.

The original ROCKY itself wasn't just an underdog story--the behind-the-scenes efforts of the then unknown Stallone to bring his script to the screen with him starring as the lead character was even more of one. At first glance the original ROCKY may seem a very simple concept--it's the type of story that has been done over and over again and will continue to be--but the material was treated with such earnestness and respect that it made an emotional connection to audiences--a connection that lasts to this day. Are the Rocky movies predictable? Yes. Have you seen them so many times that you know exactly what is going to happen? Yes...but the important thing is that they still work.

There's not one entry in the entire Rocky series that I would call truly bad. Even ROCKY V isn't as mediocre as many assume it to be. If you go back and watch all the Rocky films, including the Creed ones, the characters in them all go through believable progressions through the series. Watching all the Rocky characters over the years is like watching a family or a group of friends you know--heck, most folks would say they know these characters better than real people. Stallone has written, co-written, or directed every film in the Rocky series, and to be able to present this ongoing storyline over such a long period of time without going off the rails shouldn't be underestimated...consider that most movie franchises lose steam around the third entry. Stallone must be doing something right as a writer.

We also have to give credit to Stallone as an actor. One of the reasons that Rocky Balboa is one of the most iconic film characters ever is due to Stallone's portrayal. Rocky truly is a good guy, and Stallone has always presented him as someone who audiences feel they know and like. Stallone has often used light humor to touch upon Rocky's lack of polish...but he's never looked down on the character. Rocky isn't sophisticated or an intellectual, but he's honest and well-meaning, and most importantly, audiences relate to what he's going through. If you can get the audience on your character's side, you have a major advantage.

Sylvester Stallone has gone through plenty of critical dubbing over the years--he has been in films such as RHINESTONE and OVER THE TOP, after all. But he's also been involved in three different major film franchises--Rocky, Rambo, and the Expendables--and he's written and directed scores of films that have made tons of money. Every major holiday some cable TV channel is running a Rocky marathon, and if you drop any sort of clever reference to any of the Rocky movies on the internet, you'll get some feedback. It's easy to make fun of Sylvester Stallone, but in all honesty, how many filmmakers have had as much influence on mass entertainment as he has?

In closing, the best way I can pay tribute to Sylvester Stallone and Rocky Balboa is to offer up a hearty and heartfelt "YO"!!!