SALT IN THE WOUND 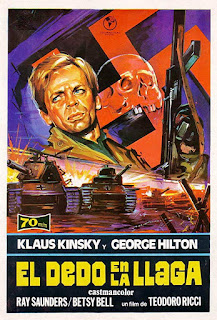 A week or so ago I wrote a post on an Italian WWII film called FIVE FOR HELL. In it I made reference to the fact that Klaus Kinski played a SS Colonel by asking the question, "What else would Kinski play in a WWII movie?" My friend Troy Howarth, who has written a book about the actor (REAL DEPRAVITIES: THE FILMS OF KLAUS KINSKI) informed me that Kinski actually played an American soldier in a 1969 production called SALT IN THE WOUND. This intrigued me enough to search the movie out on YouTube and view it.

SALT IN THE WOUND begins (at least in the version I saw of it) with various shots of a barren landscape, while a stentorian-voiced narrator quotes scripture. Just when you think you've stumbled onto a Biblical epic by mistake, the scene abruptly switches to the Italian theater of World War II. Two GIs, played by Klaus Kinski and Ray Saunders, have been convicted of murder by a military court and are sentenced to be executed. (Kinski's character shot an elderly Italian woman while looting a house, and Saunders' character killed an officer.) A newly-arrived clean-cut by the book Lieutenant (played by George Hilton) is ordered to preside over the executions. The condemned men are taken out to the countryside to be shot, but German soldiers attack the group. The execution squad is wiped out, and Hilton, Kinski, and Saunders escape. The three men form an uneasy alliance to survive, and they stumble into a small village, where they are hailed as liberators. Their short idyll away from the war comes to and abrupt end when the Germans attack the town, and the trio must fight them off by themselves.

I expected SALT IN THE WOUND to have plenty of Spaghetti Western-style flourishes, but it actually is more of a drama than a action picture. The conflict comes from the strained partnership between the three main characters, who all have widely divergent backgrounds and mistrust of one another. Kinski's corporal is cynical and surly, with a "I only care about myself" attitude--but at the same time, the actor is still able to show the self-loathing the man feels for what he has become. At the beginning it's somewhat disconcerting to see Kinski as an American infantryman, but he's talented enough to make it work (this time the English dubbing is a help instead of a hindrance). Kinski even gets to have a poignant romance with a young Italian girl who sees him as a savior of her hometown.

Ray Saunders' character, who is African-American, gets to bond with a pre-teen Italian boy, and despite his newfound status as a liberator, the man still comes off as an outsider. George Hilton, who got one chance to play the "official" version of the Euro Western character Sartana, does very well as the uptight Lieutenant who begins to realize that rules and regulations mean very little in war.

SALT IN THE WOUND does have a few action sequences, the main one being the climatic battle. These sequences are handled capably, and they thankfully lack the more outlandish elements one usually sees in Italian genre films made during this period. The whole film, in fact, has a more down-to-earth tone than one expects from this type of product. The Italian locations give the story plenty of verisimilitude, and Riz Ortolani's militaristic score sets the mood properly. The movie was co-written and directed by Tonino Ricci (on the credits he's billed as Teodoro Ricci), and all in all he does a fine job in making a low-budget WWII story intriguing and interesting without being overly violent or exploitative.

According to my researches, SALT IN THE WOUND is known under several different titles, including WAR FEVER, THE LIBERATORS, and THE DIRTY TWO. The original Italian title is IL DITO NELLA PIAGA. The version I saw on YouTube was 87 minutes long, and in widescreen, and the print didn't look all that bad.