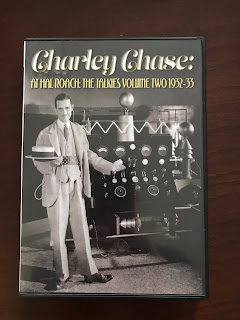 The set is made up of fifteen different short subjects on two discs. All of the shorts were made at Hal Roach Studios and star Charley Chase.

What made the first CHARLEY CHASE AT HAL ROACH DVD volume special is the fact that Thelma Todd appeared in nearly half the movies on the set. She only appears once in volume two--THE NICKEL NURSER, which sadly would be the very last time Charley and Thelma would appear onscreen together.

The shorts in this set seem to have more of a bizarre aspect to them than Charley Chase's usual work. There was a lot going on behind the scenes during the production of this group of shorts, as alluded to in Richard M. Roberts' audio commentaries. The Hal Roach Studios were undergoing a series of budget cuts, and at one point according to Roberts, Chase actually left Roach's employ. Charley also underwent various changes in directors and leading ladies. An actress named Muriel Evans would costar with Charley on the most of the films in this set, but she didn't have the comic expressiveness that Thelma Todd had (then again, not many actresses did). Chase would wind up directing the shorts himself. All of these factors combined may be one of the reasons many of the shorts have an uneven quality about them.

Nevertheless, there are some winners in this set, such as NATURE IN THE WRONG, a wild Tarzan spoof, and HIS SILENT RACKET, which features James Finlayson and Anita Garvin. LUNCHEON AT TWELVE is very reminiscent of the Three Stooges shorts Charley would direct at Columbia some years later.

These are technically Pre-Code films, but there's not as many risque elements as one would expect. There is plenty of singing and comic dancing, and it is at these times when Charley seems to be enjoying himself the most.

The shorts are all in decent condition. I wouldn't call the visual or sound quality superlative, but the most important thing is that these shorts are on official home video, period.

Classic film expert Richard M. Roberts provides an audio commentary for every single short. His knowledge of movie comedies and comedians of the silent and early sound era is inexhaustible--I marvel at how he had the time and the opportunity to see the numerous obscure comedy films he constantly refers to. Roberts discusses what was going on at the Hal Roach studios at the time these shorts were made, and he analyses how Charley Chase's onscreen persona affected the company's overall style. A poster and stills gallery is included, as well as a bonus short. This is UNA CANA AL AIRE, a Spanish version of Charley's LOOSER THAN LOOSE. This is basically a curio--at about forty minutes it goes on too long, and it's not as funny as the original.

This set of rare Charley Chase short films from the early 1930s might seem made just for hardcore movie geeks, but overall they are enjoyable, especially for those used to classic early film comedy. The Sprocket Vault and Kit Parker Films deserve a huge round of applause in making these shorts available on home video, and I sincerely hope there are more Hal Roach sets planned for the future.
Posted by Dan Day, Jr. at 1:02 PM