QUATERMASS 2 On Blu-ray From Shout Factory 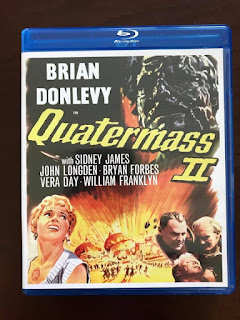 This main disc cover of this Shout Factory Blu-ray presents the movie's title as QUATERMASS II. The reverse of the disc cover sleeve displays the American release title of the film: ENEMY FROM SPACE. The actual on-screen title of the movie is QUATERMASS 2. Whatever you want to call it, this production is one of the best science fiction features of the 1950s.

QUATERMASS 2 (1957) doesn't seem to get the appreciation, or the coverage, that the other two Hammer Quatermass films receive. QUATERMASS 2, at least in my experience, never gets shown on television as much as THE QUATERMASS XPERIMENT and QUATERMASS AND THE PIT do. Hopefully this new Blu-ray will gain the film some new devotees.

QUATERMASS 2 (the title refers to a rocket, not the fact that it's a sequel) is a moody, fast-moving conspiracy thriller that if anything holds up better now than when it was made. The plot involves alien beings from outer space infiltrating the British power structure by building a processing plant that is supposedly producing synthetic food. The human workers that actually run the plant are given high-paying jobs, housing, and other amenities--as long as they keep absolute loyalty to the "company" in charge. It's not hard to compare the aliens in this film to the giant faceless corporations that run so much of everything these days. Professor Quatermass (Brian Donlevy, returning as the character from THE QUATERMASS XPERIMENT) stumbles upon this scheme and determines to stop it.

QUATERMASS 2 may be a science fiction tale, but it has as many disquieting moments as any Hammer Gothic horror. (It also has a zombie story aspect to it due to the number of people under the aliens' control.) As he did in THE QUATERMASS XPERIMENT, director Val Guest uses a black & white matter-of-fact style to keep things riveting. An actual oil refinery was used as the location for the processing plant, and Guest and his cinematographer Gerald Gibbs make the place look cold and foreboding. Several other outdoor locations are used throughout to give the story a sense of reality. The mood of the film is enhanced greatly by James Bernard's frantic music score.

The major highlight in the film is when Quatermass and a brazen Parliament member take part in a tour of the processing plant. The unusually affable tour "guide" (John Van Eyssen) is one of the creepiest characters in Hammer history, and the Parliament member's horrific fate is a rather shocking moment. The climax reveals alien creatures that are giant slimy amorphous blobs...and these creations are still more unsettling than any 21st Century CGI.

I must admit that I have never seen any of the original Quatermass serials that were shown on BBC television and which the Hammer films are based on. Nigel Kneale, who created the character and wrote the original Quatermass teleplays, didn't like Brian Donlevy's interpretation of the Professor, but I have no problem with his performance. Donlevy wasn't exactly a British scientist type, but his no-nonsense, get to the point style fits perfectly with the vibe Val Guest was trying to create. I find the urban legends about Donlevy being drunk and having to use cue cards on the Quatermass films hard to believe--here, as in THE QUATERMASS XPERIMENT, he appears totally focused on what's happening around him, and invested in the story. There's plenty of Hammer veterans in the supporting cast, such as Michael Ripper, Charles Lloyd Pack, and Percy Herbert. CARRY ON star Sid James plays a reporter who tries to help Quatermass.

QUATERMASS 2 was one of the titles included among Anchor Bay's Hammer home video releases in the 1990s. Shout Factory claims that they have used a new 2K scan of the only surviving film print for this Region A Blu-ray. According to the DVD Drive-In website, the aspect ratio is 1.75:1. It's a nice transfer, very sharp in some areas, but there are times when the picture appears overly dark. The DTS-HD mono audio sounds very well.

There's plenty of extras, including a vintage interview with Val Guest, which covers not just the Quatermass movies but much of his overall Hammer career. There's very short interviews with Brian Johnson and Hugh Harlow, who both worked on the film, and a still gallery and a American trailer. Another episode of "The World of Hammer" is here, focusing on the company's science fiction output.

There's three different commentaries. If you've been getting these recent Shout Factory Hammer releases, you can probably guess that one involves Constantine Nasr and Steve Haberman, and the other involves Ted Newsom. An older talk with Nigel Kneale and Val Guest is included as well.

QUATERMASS 2 is a film that has long needed a special edition Blu-ray, especially for Region A. It is a finely crafted science fiction classic that deserves more attention.