HORROR OF FRANKENSTEIN On Blu-ray From Shout Factory 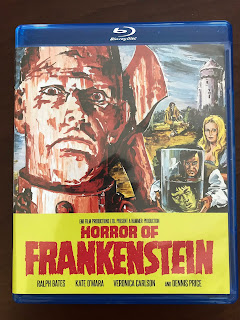 Shout Factory's series of Region A Hammer releases carries on with HORROR OF FRANKENSTEIN (1970).

This movie is the product of one of Hammer's most quizzical production decisions. By 1970 the company had made five Frankenstein features starring Peter Cushing. The latest film in the series was the bleak FRANKENSTEIN MUST BE DESTROYED, which is now considered one of Hammer's best films. The Cushing Frankenstein films were not as popular as the Christopher Lee Dracula series, but they were still an important part of Hammer's overall output. The decision was then made to do what would now be called a re-boot--cast a different, younger actor as Baron Frankenstein and essentially remake the first Hammer Gothic horror, THE CURSE OF FRANKENSTEIN.

Hammer had a script from Jeremy Burnham, and to get Jimmy Sangster (the writer on the earliest of the company's Gothic horrors) interested in the project, he was allowed to produce and direct as well. Sangster wasn't really that much of a Gothic horror fan, and he decided to try to put some humor in the movie. Ralph Bates (who Hammer was grooming as a successor to Cushing & Lee) was cast as the Baron.

The end result is an anomaly. From my point of view, it's not funny enough to be looked upon as a spoof, and it's not serious enough to be judged as a proper Gothic horror tale. The humor that Sangster tries to inject here is basically dark understatement. Dry, ironic humor is very hard to convey on screen, especially in the context of a Gothic horror tale. It might have worked better if Sangster had went all the way and made something like Mel Brooks' YOUNG FRANKENSTEIN. The thing is, Mel Brooks had a love and affection for the Universal classics he was spoofing, while Sangster seems to be looking down on the genre he once helped to revitalize.

Peter Cushing's Baron Frankenstein did horrible things in his films, but he also made the audience understand that he was totally committed to achieving his scientific goals, no matter what the cost. Cushing also had a dynamic intensity that piqued a viewer's interest. Ralph Bates as the Baron doesn't seem committed to anything. He gives the impression that he does terrible things simply because he can get away with them. Bates spends the movie with a bored, bemused look on his face (even when he's in bed with Kate O'Mara he doesn't look all that excited about it). I assume that Sangster and Bates thought that the Baron's absolute lack of empathy here would come out as funny, but it just makes the lead character very unappealing. (I do have to say that Bates is quite excellent playing a smarmy jerk.)

The character of the monster, as played by future Darth Vader David Prowse, fares even worse. The creature brutishly lumbers about (as per Sangster's instructions), attacking without provocation. It doesn't help that Prowse is dressed in what resembles a giant diaper. The Hammer Glamour quotient is more than ably filled by Kate O'Mara and Veronica Carlson. O'Mara gets to make the bigger impression as the Baron's maid/mistress. Sadly, Veronica gets very little to do as Elizabeth, and her character is made to appear silly by her crush on the Baron, who has no interest in her. (Veronica personally liked Ralph Bates and Jimmy Sangster, but she was not happy with the film's tone and her role.) Audio commentator Bruce Hallenbeck states that Veronica never looked lovelier on screen than she did in this film (of course about the only way she could have looked bad in any of her movies was for someone to put a brick wall in front of her). 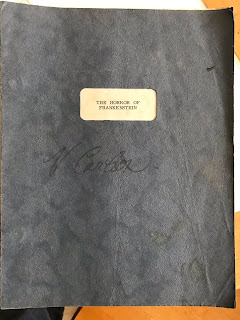 HORROR OF FRANKENSTEIN lacks the involvement of many of Hammer's leading names. Production designer Bernard Robinson had passed away, and James Bernard did not do the music score. The movie also lacks many of the usual faces one expects in the supporting cast. (There is a showy role for Dennis Price as a fellow who procures bodies for the Baron--he's more entertaining to watch than Bates.) Despite Sangster's strange approach, the killings in the story are rather vicious, and the movie was advertised as a straight horror film. HORROR OF FRANKENSTEIN was not a big success (even among most Hammer fans today), and Peter Cushing, along with director Terence Fisher, would return to the series a couple years later with FRANKENSTEIN AND THE MONSTER FROM HELL.

So, since I'm not a big fan of this film, why did I buy this Blu-ray? Well...you wouldn't want me to spend my money responsibly, would you?? Actually, Shout Factory has gone out of their way to make this disc an enticing purchase. Believe it or not, I had never owned HORROR OF FRANKENSTEIN on home video before...but every time I had seen it on TV, it looked dull and flat. This new Blu-ray features a colorful, vibrant transfer in two different aspect rations--1.85:1 and 1.66:1.

There's plenty of extras, the most important one being a interview with Veronica Carlson by Constantine Nasr that was filmed in her home a couple years ago. Veronica speaks with genuine emotion and appreciation of her days at Hammer, and her dissatisfaction with HORROR OF FRANKENSTEIN. There's also another interview with Veronica from 2001. A talk with Jimmy Sangster from the 1990s is included (most of Sangster's answers to the questions put to him are basically "I don't know or remember"). There's a short discussion with Nicholas Granby, who worked as a assistant director on the film.

There's a short featurette on the making of HORROR OF FRANKENSTEIN, where such Hammer experts as Jonathan Rigby give their opinions on the production. An extensive stills gallery is here as well, with many glamorous photos of Kate O'Mara and Veronica Carlson.

This disc has a brand new audio commentary by Bruce Hallenbeck, who has written extensively about Hammer Films. It's an engaging talk (Bruce happens to enjoy the movie), and plenty of relevant information is given. There's also an older commentary with Jimmy Sangster and Marcus Hearn.

HORROR OF FRANKENSTEIN is, in my opinion, a Hammer experiment that doesn't work...but this Shout Factory Blu-ray certainly does, especially if you are an admirer of Veronica Carlson.
Posted by Dan Day, Jr. at 11:22 AM