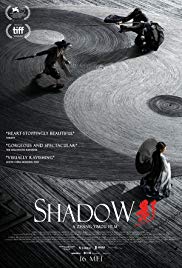 Chinese director Zhang Yimou has made such films as HERO, HOUSE OF FLYING DAGGERS, and CURSE OF THE GOLDEN FLOWER. I'm particularly fond of those three titles. His latest film is SHADOW.

The movie is set in ancient China, and concerns two kingdoms, Pei and Yang, who are jockeying for control of Jing City. Pei's military commander has challenged the Yang commander to a duel--the winner will gain control of the city for the province he represents. The Pei commander is actually a servant in disguise, a man trained since boyhood to pose as the high-ranking officer, who he greatly resembles. The servant is basically the commander's "shadow". The real commander hides in the catacombs of Pei castle, secretly training his substitute and plotting to take over the kingdom if his twin is successful in winning the duel. The shadow just wants to fulfill his duty and be allowed to go home--but the machinations of the emotionally unstable Pei king may cause the scheme to fall apart, while the real commander's wife starts to have feelings for his twin...feelings that are reciprocated.

What I loved about movies like HERO and CURSE OF THE GOLDEN FLOWER was their bold and unique use of color. In SHADOW, Zhang Yimou takes away all the color. Everything--the sets, the backgrounds, the wardrobes--are a combination of black, dark grey, or dull white. The only color comes from the skin tones of the characters. The effect is accentuated by the fact that it is constantly raining during the entire story. I'm no fan of desaturated color schemes, and this example is so pronounced I felt as if I was watching a Chinese version of SIN CITY. Instead of fake black & white, I wish that Yimou and his cinematographer Xiaoding Zhao had just went ahead and filmed in actual black & white--they do present some striking compositions. I got used to this minimalist color scheme after awhile, but personally I think the story would have worked just as well--or even better--with a regular color pattern.

As with most of Yimou's tales of historical court intrigue, the story is more concerned with themes like honor, betrayal, and deceit instead of super-charged action sequences. There are some martial arts battles, but not as many as one would think. When there are battles, Yimou and the movie's stunt team stage the action in an unusual and distinct manner, totally different from the Hollywood way.

SHADOW is also different from Western storytelling in that there are no typically "good" or "bad" characters--Yimou (who also co-wrote the screenplay) doesn't so much judge the characters as he observes them. The various double-dealings and interactions have a Shakespearean quality to them, and one can't help but feel a sense of doom hangs over all (mainly due to the bleak visual style). Deng Chao plays a dual role as the real commander and his shadow, and he does a magnificent job--I honestly thought that two separate actors played the roles. The film has a fair amount of dialogue, which means a fair amount of subtitles.

I wouldn't consider SHADOW as one of Zhang Yimou's best films, but maybe I'm focusing too much on the color scheme. It still remains as a intriguing adult historical drama, and it is a viable antidote to all the comic book and animated movies that are now flooding the market.