THE REPTILE On Blu-ray From Shout Factory 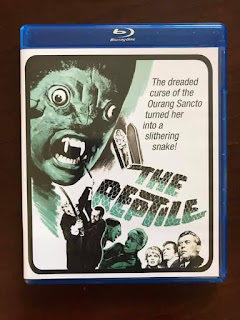 Shout Factory continues its series of Region A Blu-ray Hammer releases with THE REPTILE (1966).

THE REPTILE was made by Hammer immediately after THE PLAGUE OF THE ZOMBIES. The latter film has the better reputation, but THE REPTILE is a nice little movie in its own right. Directed by John Gilling and using the same sets as PLAGUE, it may not have Peter Cushing or Christopher Lee but it still features an effective cast. Ray Barrett is one of the best Hammer leading men, and the lovely Jennifer Daniel basically reprises her role in THE KISS OF THE VAMPIRE as his kindly and appealing wife. Noel Willman is haughtily intense as the mysterious Dr. Franklyn, and Jacqueline Pearce gains sympathy as the title character (I think it's safe to say that she periodically turns into a snake creature--the film's advertising and trailers give it away). THE REPTILE also gives veteran supporting actors Michael Ripper and Marne Maitland a welcome opportunity to shine.

THE REPTILE has some slow spots, and the film's "mystery" is pretty easy to figure out, but it holds up very well compared to a number of other Hammer features.

When it comes to THE REPTILE being released on any home video format, the first thing one has to ask is, "What is the visual quality??" In my experience, THE REPTILE has always looked bad. The last time I saw it on Turner Classic Movies, it was presented in pan & scan!! The print used on the old Anchor Bay DVD was in bad shape--it made you think the entire movie was shot day for night (in all honesty, a number of sequences in it were actually shot that way).

Shout Factory's Blu-ray is a major improvement. There are times when the image is a bit soft, and there's a few scenes where it looks subpar (particularly the main title sequence). But overall the picture is much brighter and colorful, with increased detail. What comes across from watching this Blu-ray is how the dominant color of the film is decidedly green--the grass and leaves at the outdoor locations are quite healthy, and the hue is most noticeable in the production design and the costumes. Was this done on purpose due to the title character?

This Blu-ray presents the film in two different aspect ratios: 1.66:1 and 1.85:1 (honestly, they look almost exactly the same). The extras include a short interview with the movie's assistant director William P. Cartlidge, and a brief documentary on the making of THE REPTILE. There's also a "World of Hammer" episode on villainous female characters, trailers, TV spots, a still gallery, and reversible cover sleeve art.

This movie gets only one audio commentary, featuring Steve Haberman, Ted Newsom, and Constantine Nasr. It's okay, but I hope that in their future Hammer releases Shout Factory tries to get more variety in the voices used for these talks.

THE REPTILE isn't top-level Hammer, but it may get more appreciation due to the way it looks on this disc.
Posted by Dan Day, Jr. at 1:20 PM