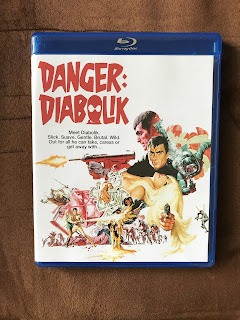 A few years ago, I wrote a blog post on my favorite comic book movies. Included in the list was the 1967 film DANGER: DIABOLIK, which was based on a Italian fumetti character. A few folks thought that was a mystifying choice. But DIABOLIK stills holds up as a great comic adaptation, and it is now on Region A Blu-ray courtesy of Shout Factory.

Produced by Dino De Laurentiis and directed by Mario Bava, DIABOLIK is pure comic escapist fantasy. The movie isn't worried about being realistic or gritty--the story doesn't even reveal what time or location it takes place in. The super-criminal Diabolik (John Phillip Law) isn't given a backstory, or an explanation on why he commits his fantastic robberies. There's no social or political aspect to what Diabolik does--he's in it for his own pleasure, and for the pleasure of his unbelievably gorgeous girlfriend Eva (Marisa Mell, who happens to be the film's best special effect).

The wild world that Diabolik inhabits is a fertile playground for Mario Bava's visual and technical artistry. The movie is bold, colorful, and fast moving, and it's not worried about logic or trying to make sense. The entire production is helped immeasurably by Ennio Morricone's vivid and vibrant music score, one of his all-time best.

DANGER: DIABOLIK was released on Region 1 DVD by Paramount in 2005. The new Shout Factory Blu-ray is in 1.85:1 widescreen. There's been a few people on the internet that have complained about the transfer on this Blu-ray.....personally, I think it looks fine (I think some have been spoiled by the many outstanding-looking Blu-ray releases of Bava's work in the past few years). The soundtrack on this disc features the original American voice dub, and Morricone's music in particular comes out bold and clear.

All the extras that were on the old DVD are carried over to this release, including the audio commentary with Tim Lucas and John Phillip Law. This talk is important in that it contains Law's memories and opinions on the making of the film.

The only extra provided by Shout Factory is a brand new commentary with Troy Howarth and Nathaniel Thompson. Both are Bava fans and experts (Troy wrote the fine book THE HAUNTED WORLD OF MARIO BAVA). They reveal plenty of pertinent info on the making of the film, but they do it in an enjoyable manner--they obviously had a lot of fun talking about this film. They also discuss various aspects of Bava's career and his style.

Just about every film Mario Bava ever directed has been given a major Blu-ray release in the past decade. DANGER: DIABOLIK finally joins the list. It may not have as many new extras as other Bava releases, but any true fan of the director--or of 1960s cult cinema--has to pick it up.