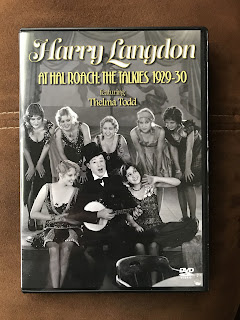 The back of the disc case for this set states, "This is Harry Langdon at his most surreal." That has to be the understatement of the year. The shorts in this set are so bizarre, so flat-out strange, that my first reaction to them was astonishment instead of amusement. Even at his best, Harry Langdon is something of an acquired taste. Langdon carries over his usual silent screen persona to these early sound shorts--that of a quixotic, naive innocent who is not able to function in everyday society. Langdon basically exists in a vacuum during these films--everything that is going on around him seems to have no effect whatsoever.

The eight shorts in this set don't have much of a storyline or plot--a basic situation is set up in each, and Harry spends most of his time trying to accomplish what for anyone else would be simple ordinary tasks. Langdon's antics may seem cute to some, but I'm sure many (even those used to classic movie comedy) might find him exasperating.

Thelma Todd gets special billing on the disc cover, and she appears in six of the eight shorts. It does need to be pointed out that in two of those shorts, she doesn't get much to do. In THE HEAD GUY, she's only in one scene, and in THE FIGHTING PARSON, she's among the crowd of saloon patrons, dressed as a dance-hall girl (you definitely can't miss her)--but she has no dialogue! Considering that she was second-billed in these two shorts, I have to wonder if other scenes with her were cut out in both of them.

The first two shorts in the set, HOTTER THAN HOT and SKY BOY, have lost soundtracks, so on this DVD subtitles are provided, along with original music scores by Andrew Earle Simpson. Actually these two shorts come off better than the rest because they are silent. When Langdon does speak in the shorts, it's usually an absurdist babble that at times is almost unintelligible.

HOTTER THAN HOT is in my opinion the best short of the set, due to the fact that Thelma is in it throughout. Todd also gets a showcase in THE KING, in which she is the queen of a fairy-tale like kingdom. Harry (of all people) is the reigning monarch, and Thelma treats him like a small child instead of a husband, at one point putting him over her knees and spanking him. (Believe it or not, that action is one of the more "normal" things that happen in the shorts on this set.)

The eight shorts on this set two-disc set are not in pristine condition, but the fact that they are getting an official home video release period is impressive. (Most of the shorts here were photographed by George Stevens.) The sound quality is variable at times, but one must remember that these were made during the very early talkie period.

Like the other Hal Roach sets released by The Sprocket Vault, this one has plenty of extras. There's a Spanish language version of THE BIG KICK called LA ESTACION DE GASOLINA, along with English subtitles. A very short feature that was made to announce Harry Langdon joining up with Hal Roach is included (this has Thelma Todd in it). There's also a 1963 program detailing an auction involving property on the Hal Roach studio lot (watching this made me wonder what all that stuff would be worth today). A photo gallery is provided as well.

Film historian Richard M. Roberts does audio commentaries for all eight films on this set. Roberts spends most of his time discussing and analyzing Harry Langdon's film comedy style. Roberts is a fan of Langdon's, and he believes that the man has not been properly appreciated. I wouldn't say that Robert's comments on Langdon made me change my mind on his work, but the talks are interesting and insightful, and they are worth listening to.

The Harry Langdon at Hal Roach DVD set is about as obscure as you can get--and because of that, Kit Parker Films and The Sprocket Vault deserve all the credit in the world for putting them out. I must admit that the major reason I bought this was due to Thelma Todd. I much prefer the silent version of Harry Langdon, especially his feature films THE STRONG MAN and TRAMP TRAMP TRAMP. The shorts on this set are far more weird than funny....but they are intriguing from a film geek standpoint.