Last night, courtesy of the Tubi streaming platform, I watched a film called ESCAPE TO ATHENA. It is one of those many 1970s big-budget action films that feature an international cast and exotic locations. The movie is set during World War II, and it was made by the same company and producers as THE EAGLE HAS LANDED.

ESCAPE TO ATHENA is a strange concoction. The best way I can describe it is that it's a combination of THE GREAT ESCAPE, THE GUNS OF NAVARONE, and HOGAN"S HEROES. The story takes place somewhere in the Greek islands in 1944, with the country under occupation by Nazi Germany. On one particular island a German POW camp doubles as a archaeology site. The camp commandant is a Major Otto Hecht (Roger Moore). The Major happens to be an Austrian art dealer who is more interested in looting ancient treasures than furthering the Nazi cause. Among the prisoners in the camp are a British professor (David Niven), an Italian cook (Sonny Bono), and a American GI (Richard Roundtree). This motley group works with the local native resistance, which is led by Zeno (Telly Savalas). Zeno's headquarters is disguised as a bordello run by his love interest (Claudia Cardinale). Two vaudeville performers with the USO are interred at the camp, played by Elliott Gould and Stefanie Powers. All of the main characters are really interested in the gold plates supposedly hidden in a local mountaintop monastery. But the monastery is hiding something else--a secret Nazi V-2 rocket base. Zeno uses everyone's greed to convince them to attack the monastery and help the resistance.

The first thing one has to discuss about this movie is the casting of Roger Moore as a Wehrmacht officer. If you can't believe Moore in this role, he plays it as if he can't believe it either. Moore uses a slight German accent, but it just makes him sound more comedic. He's still playing "Roger Moore"--complete with his usual 1970s hairstyle and eyebrow raised in bemusement. Moore spends a lot of time trying to charm Stefanie Powers, and much is made of the fact that he's not a Nazi--so you can probably figure out how his character is going to wind up by the climax. 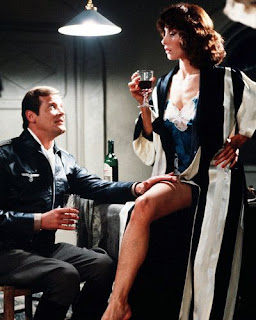 Roger Moore and Stefanie Powers in ESCAPE TO ATHENA


Moore's light approach seems to have affected most of the cast. Nearly everyone else appears to be enjoying their paid Greek vacation, and the scenes in the POW camp come off as silly at times. The camp hi-jinx do not sit comfortably with scenes of Greek partisans being executed by Nazi firing squads. Elliott Gould in particular overdoes the wise-cracking con artist bit. There's nothing wrong with having some fun in an action-adventure war movie. The problem is that the characters played by Gould, Powers, Bono, and Roundtree are set up as goofy, so when the time comes for them to be involved in violent daring-do, their actions feel phony. There's a great motorcycle chase in this film, with the vehicles zooming in and out of narrow back alleys. The chase would have been even more memorable if Gould's character was not on one of the bikes--you can't believe this guy could get on a motorcycle, let alone drive it at hair-raising speeds on unfamiliar terrain. At least Telly Savalas is absolutely serious as the determined resistance leader. (Due to his ancestry, the actor of all people would know how Greece suffered during Nazi occupation.)

The climax involving the rocket base at the monastery has a James Bond-like feel (ironic, considering who the main star of the film is). There's plenty of well-handled action scenes here--the movie's director was George P. Cosmatos, who would go on to make RAMBO: FIRST BLOOD PART II and TOMBSTONE. The stunts were handled by famed co-ordinator Vic Armstrong, and the special effects by John Richardson. The exotic Greek locations are used to full effect by Gilbert Taylor's cinematography. Lalo Schifrin provides an ethnic-flavored music score that at times resembles his work for KELLY'S HEROES.

ESCAPE TO ATHENA has all the trappings of a great WWII action-adventure, but the approach is too inconsistent. Among the highlights--if that is what you want to call them--in this film are Stefanie Powers doing a striptease to distract the Germans while the POWs are taking over the camp, Sonny Bono beating up Waffen-SS soldiers, Telly Savalas and Claudia Cardinale performing a Greek dance, and a brazen in-joke referencing STALAG 17. There's also a disco song during the end credits!

If ESCAPE TO ATHENA had tried to be a all-out serious action story--and if it had a more authentic cast instead of a notable one--it would have been far more effective. The movie was not a box office success--I don't remember ever hearing about it or seeing advertising for it when I was a kid. If one is interested in seeing it, the widescreen print available on Tubi looks excellent.