THE EVIL OF FRANKENSTEIN On Blu-ray From Shout Factory 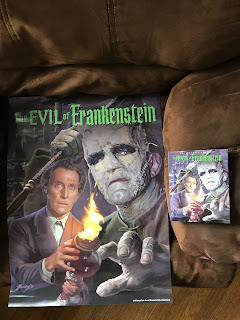 Another Hammer Blu-ray from Shout Factory--this time it's the third film in the Peter Cushing Frankenstein series, THE EVIL OF FRANKENSTEIN, released in 1964.

THE EVIL OF FRANKENSTEIN is the odd man out when it comes to Peter Cushing's portrayals of the Baron. It is the only Cushing-Frankenstein film not directed by Terence Fisher, and it does not follow the continuity of the first two films, THE CURSE OF FRANKENSTEIN and THE REVENGE OF FRANKENSTEIN. The entire affair is something of a reboot, with the Baron given a different backstory and a different monster (he also has a somewhat different manner and attitude).

Freddie Francis was the director for this one, and he concentrates on the visual aspects of the story. There's a great laboratory sequence, and a fiery climax...but Anthony Hinds' script is very disjointed, and the pace drags. Hammer made this film in conjunction with Universal Studios. This is the one Hammer horror film that does feel like it could have been made in America during the 1940s.

Wrestler Kiwi Kingston plays the monster, and Roy Ashton's makeup for the creature does bear a certain resemblance to the famed Jack Pierce design for Boris Karloff. But the makeup for Kingston is mediocre, and it comes off worse in HD. Kingston is more of a Glenn Strange type than Karloff.

Even the Hammer Glamour element is toned down in this one. Buxom Caron Gardner has a small role as the Burgomaster's wife, but the main female character is a dirt-caked mute beggar girl played by Katy Wild. With all the old-fashioned elements--and some very hammy acting by the supporting players--THE EVIL OF FRANKENSTEIN feels like a run-of-the-mill monster flick (not that there's anything wrong with that).

THE EVIL OF FRANKENSTEIN has been released before on Region A Blu-ray, as part of the Universal Hammer horror set that came out a few years ago. I thought the transfer on that set looked great, and this one does as well. The movie is presented here in a 1.85:1 aspect ratio, and the sound quality is excellent.

As usual, Shout Factory gives this Hammer release a number of worthy extras. The new audio commentary features Constantine Nasr, and while he appreciates the film more than most, he does point out its weaknesses. Nasr also refers to the film's original script. There's a making of documentary, with appearances by a number of folks who worked on the film.

"The Men Who Made Hammer" series continues, this time with Tony Dalton discussing the life and career of Freddie Francis. It's revealing and informative, and I wish it could have been longer. I can also say the same thing about a new interview with Katy Wild that is provided. She talks about her work on EVIL and has a telling anecdote about Peter Cushing. There's a very short featurette with Caron Gardner (who seems to enjoy her Hammer girl status), and a short interview with William Cartlidge, who was an assistant director on the film (he reveals he didn't get along with Freddie Francis). The pilot to the proposed late-1950s Hammer-Columbia TV series, TALES OF FRANKENSTEIN, is included as well (this is in the public domain and can be found just about anywhere). A trailer and a stills gallery is also on this disc.

One extra that I have to make special mention of is the American TV version of THE EVIL OF FRANKENSTEIN that was prepared by Universal. It has new scenes added by Universal to lengthen the film to fit into a two-hour TV slot. The quality of this TV version is horrible--nearly all of the colors have faded. Yet I have to say that it reminded me of how I first watched many of the Hammer films on late-night TV as a young teenager way back in the 1980s. As a matter of fact I'm thinking about writing a blog post just on the TV version.

Once again Shout Factory has used the talents of artist Mark Maddox to entice Hammer fans to purchase this disc. Those that ordered the Blu-ray direct from the company got an 18x24 poster of Mark's fantastic artwork for the disc sleeve cover (see photo above). The reverse of the disc sleeve shows the original American poster art for the film.

THE EVIL OF FRANKENSTEIN may be the least entry in the Hammer-Cushing-Frankenstein series--but the fact that it is part of that series makes it suitable for multiple viewings. As expected by now, Shout Factory's extras provide the impetus for Hammer fans to purchase this title on home video again.
Posted by Dan Day, Jr. at 7:53 AM