TARTUFFE On Blu-ray From Kino 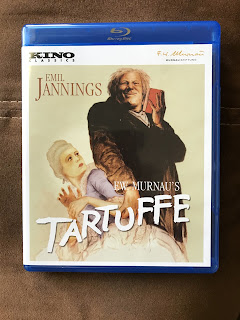 Kino Lorber continues its great line of silent cinema home video releases with the 1925 German film TARTUFFE, made by the famed UFA studios and directed by F.W. Murnau.

What makes TARTUFFE notable is the list of people who worked on it, a lineup of many of the most important talents in the German silent film industry. Besides Murnau, the list includes actors Emil Jannings, Werner Krauss, and Lil Dagover; screenwriter Carl Mayer; producer Erich Pommer; cinematographer Karl Freund; and art directors Robert Herlth and Walter Rohrig.

One would assume that with so many major names involved in the production, TARTUFFE would be a large-scale spectacular. The movie is actually rather intimate, running only little over an hour, and it's certainly not as extraordinary as some of Murnau's other films during this period, such as THE LAST LAUGH, FAUST, or SUNRISE.

The story is an adaptation of a classic play by Moliere, which deals with hypocrisy. A framing sequence depicts a conniving maid and her elderly employer. The old man's grandson knows that the maid is after her employer's money, and to prove this, he takes the rather complicated step of disguising himself and posing as the owner of a traveling cinema. The grandson convinces the maid to let him show a film...which just happens to be based on the story of Tartuffe. The film-within-a-film (which appears to be set in the 18th Century) has the acclaimed actor Emil Jannings as Tartuffe, who has a wealthy gentleman played by Werner Krauss under his spell. The gentleman's wife (Lil Dagover) mistrusts Tartuffe, and she goes to great lengths to prove that this supposed simple and saintly fellow is an absolute fraud.

I had never seen TARTUFFE before, and I expected a heavy drama--but it came off to me as lighthearted in certain sections. The acting is somewhat broad at times, and Emil Jannings' appearance and manner as Tartuffe is so disconcerting that it's a bit difficult to believe he could influence anyone to think he is a man of deep piety. (In his fine audio commentary, Troy Howarth suggests that Jannings' Tartuffe has a slight resemblance to Max Schreck's Nosferatu and John Barrymore's Mr. Hyde.)

Kino presents two versions of TARTUFFE on this Blu-ray, and both of them have been restored by Murnau-Stiftung. The German version runs 70 minutes, and it has German intertitles along with English subtitles. It features a new original score by Robert Israel. The American version runs 64 minutes, and it features a newly recorded adaptation of the original score by Giuseppe Becce. As is usual with a Kino silent movie home video release, the visual quality on both versions is impressive. I do think that the American cut is clearer and sharper.

Author and film expert Troy Howarth does a brand new audio commentary, and even though he doesn't have a lot of time, he manages to mention all the relevant details about the film, while still being able to discuss F.W. Murnau and his filmography. It's worth listening to.

I wouldn't put TARTUFFE on the same level as F.W. Murnau's more well-known silent visual epics, but this is a different type of story. Anyone with a serious interest in German silent cinema would do well to obtain this Region A release.
Posted by Dan Day, Jr. at 12:45 PM