THE CURSE OF THE WEREWOLF On Blu-ray From Shout Factory 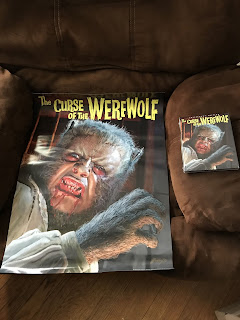 Another Hammer horror classic gets the Shout Factory deluxe Blu-ray treatment--THE CURSE OF THE WEREWOLF.

This film was the only time Hammer ever dealt with the subject of lycanthropy. It had a very complicated pre- and post-production history, which is discussed in the extras on this disc. It also had a very unusual story structure--the prologue detailing the main character's heritage is basically a mini-movie, and Oliver Reed doesn't have his first real scene until 47 minutes in the film.

The movie was directed by Terence Fisher, and it is one of the darkest and most tragic of the Gothic tales he ever helmed. In his first major screen role Oliver Reed already displays a strong, forceful presence, and he's quite stunning in his full werewolf phase, courtesy of what may be Roy Ashton's best overall makeup effort.

THE CURSE OF THE WEREWOLF had already been released on Region A Blu-ray a few years ago as part of the Universal Hammer Horror set. For whatever reason the Universal set presented the film in a very strange 2.00:1 widescreen aspect ratio. The transfer on this Shout Factory disc is in a 1.85:1 ratio, and the framing is much better. This transfer is very sharp, and one is able to see more detail in certain scenes. It must be pointed out that this Blu-ray features the complete, unedited version of the film.

There's plenty of extras here, and this movie deserves it. There's a program on the making of the film, and it contains interviews with cast members Yvonne Romain and Catherine Feller. There's also a discussion on the film's problems with the British censors, and a short talk on lycanthropy. "The Men Who Made Hammer" series continues with LITTLE SHOPPE OF HORRORS publisher Richard Klemensen talking about his long friendship with Hammer makeup artist Roy Ashton.

There's two audio commentaries--one has Steve Haberman and Constantine Nasr, and the other features Yvonne Romain (accompanied by her husband Leslie Bricusse) with FX artist Mike Hill. Yvonne has plenty of interesting stories to tell about her time working for Hammer in the early 1960s.

If you order this Blu-ray direct from Shout Factory, you get a 18 x 24 poster of the disc cover artwork by Mark Maddox (if they are still available--see photo above). The disc comes with a slip cover featuring the Maddox art, and the reverse of the disc cover sleeve has a drawing from the movie's original ad campaign.

I'm sure most Hammer fans have THE CURSE OF THE WEREWOLF in their home video collections already. I honestly think the Maddox poster alone makes it worthy of a re-buy....but the fact that this disc has a more fitting aspect ratio and numerous extras is icing on the cake.