FRANKENSTEIN: THE TRUE STORY On Blu-ray From Shout Factory 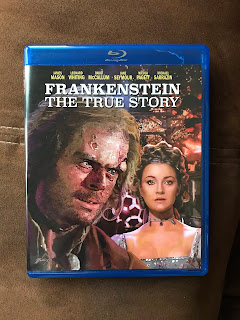 In June of 2017, I wrote a blog post on the 1973 film FRANKENSTEIN: THE TRUE STORY, which was made by Universal Studios for American television. That post was inspired by Sam Irvin's encyclopedic article on the movie for issue #38 of LITTLE SHOPPE OF HORRORS magazine.

FRANKENSTEIN: THE TRUE STORY is a hard film to categorize, since there is nothing really like it. It was originally shown in two parts on TV, and its uncut running time is around three hours. It's a sprawling, ambitious production, filled with major guest stars and impressive technical details. Despite its title, the script deviates greatly from Mary Shelley's famed novel, and presents several new ideas and situations (some which work out better than others).

I viewed FRANKENSTEIN: THE TRUE STORY for the first time on a bare-bones DVD that had no extras. The DVD also made the film look somewhat pallid. I felt that the title definitely needed a home video upgrade.

Now Shout Factory has come along and given FRANKENSTEIN: THE TRUE STORY a proper presentation. According to the disc cover, Shout Factory used a new 2K scan of the original film elements, and the picture quality is fantastic, which a rich color scheme that shows off the excellent production design and Arthur Ibbetson's cinematography. The audio, which is in DTS-HD mono, is bold and clear.

This Blu-ray would be a winner on the improved visuals and sound alone, but Shout Factory have also included new extras, involving Sam Irvin and Constantine Nasr. There's interviews with cast members Jane Seymour and Leonard Whiting, who look back fondly on the project. (The duo also reiterate that producer Hunt Stromberg Jr. was the main creative force on the film, not director Jack Smight.) Sam Irvin also sits down for an extensive talk with Don Bachardy, who co-wrote the script with Christopher Isherwood.

The disc cover features new artwork from the renowned Mark Maddox (the reverse is a reproduction of the mediocre DVD cover).

I wouldn't consider FRANKENSTEIN: THE TRUE STORY one of the best adaptations of Shelley's tale....but I would call it one of the most unique and interesting. It has some striking sequences, but I feel that at times it bites off more than it can chew. Nevertheless, it does have a fervent following, and those that do appreciate the movie's take on the horror legend, and even those who just want to know what the fuss is about, will enjoy this Blu-ray.
Posted by Dan Day, Jr. at 7:43 AM