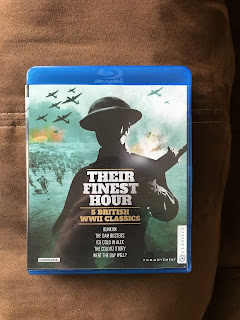 Recently I received in the mail a fantastic Blu-ray set called "Their Finest Hour: 5 British WWII Classics", from Film Movement. The set includes some of the best British war films ever made: WENT THE DAY WELL?, THE DAM BUSTERS, DUNKIRK, THE COLDITZ STORY, and ICE COLD IN ALEX. It's filled with extras relevant to each film, and it comes with a booklet discussing the titles.

The first film in the set that I viewed was WENT THE DAY WELL?, a 1942 fictional tale that presents a group of German paratroopers taking over a small English village as a prelude to a planned invasion. The premise is basically the same as that in the Jack Higgins novel THE EAGLE HAS LANDED (which was also turned into a fine film), except the emphasis here is on the villagers instead of the Germans.

Before reviewing WENT THE DAY WELL?, one must realize that it was made when World War II was still very much going on, and the outcome was far from certain. In fact the main story of the film is told in a future flashback, in which the war has been won by the Allies (thankfully those behind the film were correct in predicting this).

WENT THE DAY WELL? could be considered nothing more than wartime propaganda, but it's much more than that. It's a tightly structured, suspenseful thriller, with touches of quirky dry humor. It very much reminded me of the movies Alfred Hitchcock made in England during the mid-1930s before he went to America. If Hitchcock had stayed in England, this story would have been perfect for his talents.

The movie is quite brutal at times, and many characters are killed off in shocking and unexpected ways. Usually in an older film it's easy to guess who is going to make it to the end, but here everyone is up for grabs, adding to the suspense. The story feels realistic due to the fact that the English villagers do not automatically turn into hardcore action heroes when they have to fight back against the invading Germans. They bravely take up arms, but they don't become soulless killing machines. The viewer gets the feeling that they are seeing what it really would be like if everyday English country folk encountered a German invading force.

WENT THE DAY WELL? was produced by the famed Ealing Studios and directed by the Brazilian-born Alberto Cavalcanti. At times Cavalcanti uses an almost documentary-style look to present the quiet village and its bucolic surroundings. Once the conflict between the villagers and the enemy begins, the style shifts to expressionistic sets and atmospheric nighttime photography. Three famed British cinematographers worked on this film: Wilkie Cooper (who was the credited DOP), Gerald Gibbs (who was credited as camera operator), and Douglas Slocombe (who was credited as "documentary photographer").

The cast is filled with highly professional character actors. The movie is an ensemble piece--there isn't a leading man/main action hero role. The focus is on a group effort instead of individualism. Leslie Banks (THE MOST DANGEROUS GAME) plays an English squire who is actually a Nazi collaborator. Classic monster movie buffs will notice Elizabeth Allan (from THE MARK OF THE VAMPIRE) and Frank Lawton (THE INVISIBLE RAY).

WENT THE DAY WELL? is not just a great WWII film--it is an involving and dramatic story in its own right, especially for first-time viewers. I'll be doing other blog posts on the contents of this wonderful box set from Film Movement in the future.
Posted by Dan Day, Jr. at 7:44 AM