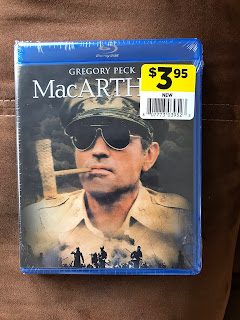 I didn't want to bring up the present situation in any of my blog writings--the last thing I want to do is remind readers of all the problems we face--but for today's subject I have to.

A week ago I stopped at a local Dollar General to look for....bath tissue. (Sad, isn't it??) They did have some left, and while I was there I looked through the cheap Blu-ray display. I came across the movie pictured above, MACARTHUR (1977), starring Gregory Peck as the legendary American military commander.

(By the way, it's always a good idea to go through any cheap movie racks you find at any store or business...because you never know what you might discover.)

MACARTHUR was released by Universal Pictures, and it has several important names attached to it. The executive producers were Richard Zanuck and David Brown, the main producer was Frank McCarthy, and the music was by Jerry Goldsmith.

McCarthy and Goldsmith had worked on PATTON, and this film tries to compare to that award-winning epic. Joseph Sargent, the director of MACARTHUR, was no Franklin Schaffner, and the result is what I think a very good film, but not a great one.

Douglas MacArthur was one of the most important figures of the 20th Century. The man was involved in so many world-shaking events and incidents that one could easily make about three or four different films based on certain parts of his life. MACARTHUR roughly covers about a decade of the General's career, from the Philippines in early 1942 to his service in the Korean War.

MACARTHUR is a little over two hours long, and there's plenty of things packed into it--MacArthur's escape from the Philippines before Japanese forces take over the country; the General's command in the Southwest Pacific; his attempts to rebuild Japan after the end of World War II; and his personal battles with other military brass and politicians, including his disagreements with President Harry Truman, which led to him being removed from his post during the Korean War. MACARTHUR tries to cover so much ground that at times it feels like a highlight reel.

Ironically, MACARTHUR was filmed entirely in the United States, with the result being that it comes off at times as a lower budget feature. (The reenactment of the Japanese surrender ceremony was filmed on the actual deck of U.S.S. Missouri.) Joseph Sargent was a long-time TV veteran, and certain sequences do have a small-screen feel. Overall, MACARTHUR lacks the epic, big-budget scope of other great historical films.

Gregory Peck is excellent as MacArthur (the actor even bore a certain resemblance to the General). Peck's MacArthur isn't as bombastic or as outlandish as George C. Scott's Patton. This MacArthur is a bit haughty, and hard to read. He's also absolutely convinced that his ideas are the right ones. Despite the fact that Peck is in almost every scene, Douglas MacArthur winds up being an unknowable figure, filled with contradictions. Historians are still trying to figure him out.

There's no other star actor in the movie to act as a counterpoint to Peck's MacArthur, the way Karl Malden did to George C. Scott in PATTON. There are fine performances by Dan O'Herlihy as FDR and Ed Flanders as Truman. Film geeks will be interested to know that among the supporting cast are such names as Russell Johnson as Admiral King and Kenneth Tobey as Admiral Halsey.

All in all, MACARTHUR was a pretty good buy for $3.95. Gregory Peck carries the film (his recitation of the General's final speech at West Point is the best scene). The film is a worthy attempt--but because its subject was such a larger-than-life intriguing figure, only a multi-part major documentary could do him justice.