One of the main things that has affected me during these recent events is the lack of sports programming. If it wasn't for sports and movies, would I even need TV?? I'm starting to wonder.

One of the tasks I have been doing lately is going through my extensive home video collection, and picking out titles I haven't viewed in a while. I recently pulled out a James Stewart DVD box set from Universal. It's an okay collection of mid-range films, the most well-known being THE GLENN MILLER STORY. There happened to be one film on the set I had not even watched yet--in fact a film I had never watched period--the 1948 YOU GOTTA STAY HAPPY.

YOU GOTTA STAY HAPPY is one of the least known James Stewart films. Even books written about the actor barely cover it. I don't even remember it ever been shown on broadcast TV. After watching it I can now understand why it's not better known.

My research on YOU GOTTA STAY HAPPY indicates that the movie was set up as a vehicle for Joan Fontaine by her then husband, producer William Dozier. It's a comedy (or at least it tries to be one), and this may have been meant as a change of pace for Fontaine, who was best known for her dramatic roles.

YOU GOTTA STAY HAPPY plays out like a 1930s screwball vehicle. Many of the typical screwball ingredients are in it: flighty rich runaway bride, a leading couple who seem totally incompatible with each other but still fall in love, and a group of quirky characters stuck in an unusual situation. It's an okay movie, but nowhere near the same level as the screwball classics made about a decade before it.

Joan Fontaine is a indecisive heiress who immediately regrets marrying her stuffed shirt boyfriend. On her wedding night she stumbles into the man staying in the room next door, a no-nonsense pilot (James Stewart) who is trying to keep his air cargo service going. Fontaine convinces Stewart to fly her to California, and of course they run into all sorts of impediments.

YOU GOTTA STAY HAPPY was directed by H.C. Potter, who had done a number of comedies by this time (his most famous film is probably MR. BLANDINGS BUILDS HIS DREAM HOUSE). It is competently made, and it has the major studio style one expects from the Golden Age of Hollywood. That being said, it lacks the spark and the crackle of the great screwball entries. It also lacks the edge that the better screwballs had--the comedy is cute rather than sarcastic or truly funny. Many of the subplots that are injected to create problems for Fontaine and Stewart never properly develop, or just fade away by the end of the story. 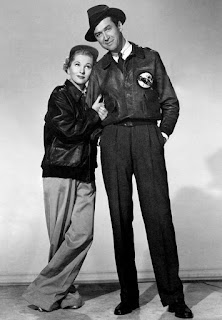 
It's ironic that this movie was developed specifically for Joan Fontaine--even though she gets first billing, she doesn't get all that much to do in it. Her character also doesn't act very wacky or flighty (was Fontaine worried about coming off as too silly?) A true comedic expert, such as Carole Lombard or Jean Arthur, would have made the character far more memorable.

James Stewart appears to have more screen time than Fontaine, and he's the best thing in the movie. I'm sure the aviation-obsessed actor was more than happy to play a pilot, and to have a cross-country flight a major part of the storyline. (At one point the plane has to make an emergency landing in bad weather, and this sequence seems to come from a totally different feature.) Stewart could have walked through a part like this, but he doesn't--he's likable and believable as always, no matter how silly the story gets.

And the story does get very silly, as the cargo plane winds up carrying a few oddballs, along with a cigar-smoking chimpanzee that seems to get more close-ups than Fontaine. The plane's emergency landing takes place on a farm inhabited by one of those "funny" old movie rural families (headed by Pa Kettle himself, Percy Kilbride). If you've seen enough of these extremely lighthearted stories you know exactly how it's going to end. YOU GOTTA STAY HAPPY lasts for about 100 minutes, and tighter editing would most certainly have helped.

If you are a Jimmy Stewart fan, YOU GOTTA STAY HAPPY is worth watching for him alone. But it remains one of the actor's lesser post-war films. He would appear in much better titles in the next few years.
Posted by Dan Day, Jr. at 11:27 AM