HOUSE OF THE GORGON Wins The Rondo Award For Best Independent Film!


If you are a regular reader of this blog, you probably know about HOUSE OF THE GORGON--writer-producer-director-star Joshua Kennedy's tribute to the English Gothic, starring four notables of that genre: Caroline Munro, Veronica Carlson, Martine Beswicke, and Christopher Neame. The movie was filmed in southeast Texas during March of 2018, and it was released on DVD last year.

I had a very small role in the production, both on-screen and off. But there were several talented individuals who had a far bigger hand in it than I did. And the genius behind it all was Josh Kennedy, who overcame many obstacles and setbacks to get what he wanted accomplished.

I'm proud to say that HOUSE OF THE GORGON has won the 2019 Rondo Hatton Classic Horror Award for Best Independent Film. Josh's past films have been nominated for Rondos a number of times, but his tribute to the Hammer films he has loved all his life finally enabled him to claim the coveted prize.

The Rondo Awards are produced in conjunction with the Classic Horror Film Board website. They have been awarded since 2002. The aim of the Rondo Award is to honor the best in classic horror research, creativity, and film preservation. There's nothing corporate about these awards--the voting is done by fans all over the world.

I'm pleased to say that I know many artists and writers who have won Rondos--I won't list them all because I know I'm going to leave someone out. The Rondo Award is a huge honor among fans of classic horror & science fiction cinema.

I personally know how much this award means to Josh, and I hope it gets him the respect and attention he deserves. I'm proud to have had a quite small part in the whole thing, but I have more pride for Josh and what he was able to accomplish.

The state of the world today is very unsettled. But there is one thing I can guarantee you--the main core behind HOUSE OF THE GORGON will be reunited again for a future production. Josh has a tantalizing idea in mind--I can't reveal the details, but trust me, it's a winner. One thing I've learned from my association with Josh is that if he wants to do something...one way or another, it's going to get done.

Congratulations to all the people involved with HOUSE OF THE GORGON! 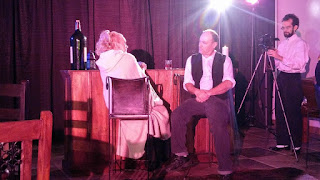 Veronica Carlson, yours truly, and Joshua Kennedy during the making of HOUSE OF THE GORGON