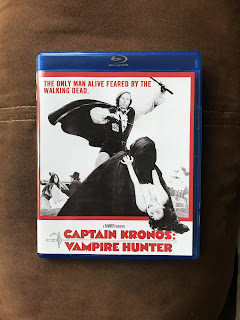 CAPTAIN KRONOS is one of the many Hammer productions that is more appreciated now than when it came out. It was made in 1972, but not even released until two years later. Hammer head Michael Carreras didn't know what to make of it, let alone know what to do with it. The mysterious Kronos--a European soldier who has dedicated his life to eradicating the undead--is a fascinating character, and he's brimming with all sorts of possibilities. Co-producer--writer--director Brian Clemens was hoping that the movie would spawn an entire series of tales, but sadly it didn't.

The main reason, in my opinion, that CAPTAIN KRONOS was not originally successful is that it was too far ahead of its time. The idea of a swashbuckling professional vampire hunter, traveling through a fairy-tale Europe and surrounded by quirky characters, seems perfect for a high-concept action-filled 21st Century production. (Why someone hasn't remade or rebooted CAPTAIN KRONOS by now is beyond me.) Brian Clemens didn't have much of a budget to work with, but he made the most of what he got, giving the show style, flair, and plenty of dry humor. Clemens also played around with the "rules" concerning cinema vampires, and he also touched upon several different genres in the story, much the same way that big-budget action blockbusters do now. Some have stated that Horst Janson as Kronos is not engaging enough, but the Captain is supposed to be a bit remote (I'm sure the character would have been explored more in any sequels).

CAPTAIN KRONOS features one of the best supporting ensembles in a Hammer film, with John Cater stealing the show as the Captain's hunchbacked assistant, along with John Carson, Shane Briant, Lois Daine, Ian Hendry, Wanda Ventham, and Caroline Munro at her loveliest. The movie is greatly enhanced by Ian Wilson's cinematography and Laurie Johnson's pulsating score.

Once again Shout Factory presents a fine-looking transfer of a Hammer film on this Blu-ray. The sound quality is quite distinct, and it really brings out the music score.

For whatever reason, there's not a lot of extras for this Blu-ray. The main one is a program called "Anything Goes: Hammer Film in The 70s". It has genre experts Kim Newman and Stephen Jones engaging in a wide-ranging but enjoyable talk about the state of Hammer Films in the early 1970s, and the entire horror film market at that time. It's basically two films geeks have a friendly conversation.

There's a new audio commentary by Hammer historian Bruce Hallenbeck, who gives all the pertinent details on the film while relating how much he admires it. Thankfully Shout Factory has carried over an earlier DVD audio commentary with Brian Clemens, Caroline Munro, and Jonathan Sothcott. It's an entertaining talk, and it's a pleasure to listen to, with Clemens and Caroline clearly enjoying the discussion. There's an original trailer for the film, and some radio spots that sound so silly it's amazing that they were judged sufficient enough for the listening public.

CAPTAIN KRONOS: VAMPIRE HUNTER is one of my favorite Hammer movies from their 1970s period. It should have helped take the company into new and vibrant directions. At least this new Blu-ray will help it to be better appreciated today.