CAPTAIN NEMO AND THE UNDERWATER CITY 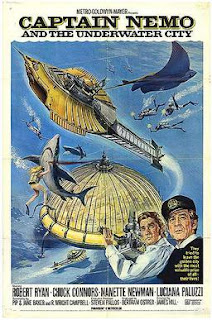 Earlier this week TCM showed CAPTAIN NEMO AND THE UNDERWATER CITY, a 1970 family-oriented fantasy-adventure made in England. I had never seen the film before.

Even though this movie was released in 1970, it feels like something that should have come out at least ten years before. The success of Disney's 20,000 LEAGUES UNDER THE SEA in the mid-1950s started up a near mini-genre made up of cinematic adaptations of stories from Jules Verne and H.G. Wells. This combination of Victorian quaintness and science-fiction adventure had run its course by 1970. CAPTAIN NEMO AND THE UNDERWATER CITY is something of a throwback considering it was made in the era of EASY RIDER.

This film is not a straight adaptation of any particular Jules Verne story--it is "inspired" by his writings. During the American Civil War, a ship bound for England is heavily damaged by a storm. The passengers rush to the lifeboats, and a small group of them are rescued by men under the command of the imperious Captain Nemo (Robert Ryan). The group is taken aboard Nemo's fantastic submarine, the Nautilus, and transported to a incredible city built 10,000 leagues under the sea. Here Nemo and his followers have created what appears to be an idyllic paradise. Nemo tells the people he has rescued that they must never leave his underwater city--he fears that once back on the surface they will tell the world about his secret society. One of the new captives is an American Senator named Fraser (Chuck Connors), who was on his way to England by orders of the U.S. government. Fraser is determined to escape, but instead of antagonizing Nemo, he gains his trust and friendship. The Senator does get a chance to get away by appropriating the newly built Nautilus II.

CAPTAIN NEMO AND THE UNDERWATER CITY has a lot in common with many large-scale family adventure films of the 60s and early 70s--it has impressive technical details and scope, but comes up short in plot and characterization. The production design is visually intriguing, if a bit ostentatious, and the movie takes every opportunity to show it off. Much of the story concerns the rescued characters being shown almost every facet of Nemo's underwater city--so much so that the movie feels like a travelogue. The settings do catch the viewer's eye, but they seem to exist to provide eye candy than to be part of an actual working society. (Speaking of working, the citizens of the underwater city don't seem to do much of it.)

There isn't a lot of conflict in the movie either. The relationship between Nemo and Fraser is far more cordial than that between James Mason's Nemo and Kirk Douglas in the famed Disney adaptation. One of the rescued characters is a sniveling coward who can't stand enclosed places, and he almost succeeds in destroying the place, but he's stopped in the nick of time. There's a couple of English louts who are obsessed with the idea that in Nemo's city, gold is so common it's unimportant. This duo is supposed to be the comic relief, except they're not very funny. The underwater city does have one major threat--a kaiju-like monster who resembles a giant manta ray. The creature is not very well realized, and it winds up getting defeated rather easily.

Robert Ryan was one of the most exemplary all-time movie actors, and he certainly had the strong screen presence for the role of Captain Nemo. Personally I think Ryan just wasn't exotic enough to be the captain. He's good in the role, and he takes the whole project dead seriously, but his Nemo isn't the brooding loner portrayed by James Mason and Herbert Lom. This might be due to the fact that Ryan's Nemo has basically created his own world, and doesn't need to worry about the "real" one. One would expect two manly actors like Ryan and Chuck Connors to set off some sparks, but their characters get along quite well most of the time. Ryan does get a few chances to show Nemo's anger at the state of mankind, but for the most part the captain is quite content here.

If CAPTAIN NEMO AND THE UNDERWATER CITY had being made during the height of cinematic Victorian science-fiction fantasy, it might have had a much more notable supporting cast. The main player of interest here is Luciana Paluzzi, who played the bad Bond girl in THUNDERBALL. She gets to have a sort-of romance with Chuck Connors, but due to the family nature of the story, it's very tame.

This film was directed by James Hill, who made one of the most renowned family adventures, BORN FREE. The main writers on the film were the husband and wife team of Pip & Jane Baker, who wrote the Terence Fisher/Christopher Lee/Peter Cushing sci-fi outing NIGHT OF THE BIG HEAT. The Bakers also wrote a number of DOCTOR WHO episodes, which this story closely resembles.

If CAPTAIN NEMO AND THE UNDERWATER CITY had been made about ten years earlier, and involved someone like George Pal or Bernard Herrmann, it might have more of a reputation. One reason I had never seen it before is that I honestly can't remember it being shown on TV. It apparently wasn't that much of a success when originally released. The main problem with the film is that it meanders about, and doesn't have all that much energy to it. The practical effects--the various models and miniatures--are above average, and the movie doesn't look cheap....but it lacks excitement, and the characters (other than Nemo) are not all that memorable. Certain aspects of this film reminded me of a couple of Japanese fantasy films from Toho Studios: ATRAGON and LATITUDE ZERO. But those two movies are much better, in my opinion. I realize that CAPTAIN NEMO AND THE UNDERWATER CITY was geared to younger viewers--but I bet even the kids of 1970 probably found it boring.