A couple nights ago, courtesy of the MOVIES! TV channel, I watched a 1954 film noir called PUSHOVER. The movie starred two of my favorite actresses of all time--Kim Novak and Dorothy Malone. PUSHOVER was in fact Novak's very first credited film role (she gets a "And Introducing" main title credit).

The movie, set in contemporary Los Angeles, opens with a very well-staged, dialogue-free bank robbery. A bank guard is killed, and $200,000 has been stolen. The police begin to shadow the girlfriend of the robbery gang's leader, a gorgeous blonde named Lona (Kim Novak). Detective Paul Sheridan (Fred MacMurray) goes out of his way to make her acquaintance, and is assigned to the group of men putting Lona under surveillance. Sheridan and Lona are attracted to one another, and the young woman convinces the older cop to kill her boyfriend so they can make off with the stolen loot. Sheridan hatches a plan to do so...but, as is usual in the shadowy world of film noir, things don't go as planned, and Sheridan's troubles get worse and worse.

PUSHOVER has plenty of the expected noir elements--atmospheric black & white photography, rain-slicked streets, and terse dialogue. Fred MacMurray spends most of the story wearing a trench coat and a fedora, and he constantly has a cigarette dangling from his lips. You get the feeling he is asking for it as soon as he starts making the moves on Lona. Obviously MacMurray's role in DOUBLE INDEMNITY comes to mind when watching PUSHOVER. MacMurray's Sheridan is a cynical, dissatisfied cop who has worked too many years for very little pay. He's easy prey for Lona's charms...yet one would think that a middle-aged cop who has seen everything would be a bit more careful about the situation. The problem is, like most noir anti-heroes, Sheridan is not particularly clever--he thinks he's one step ahead of everybody, but he's actually just getting himself in deeper and deeper. MacMurray is best known now for his Disney movies and his role on the family TV show MY THREE SONS, but he was excellent at playing misanthropic jerks. 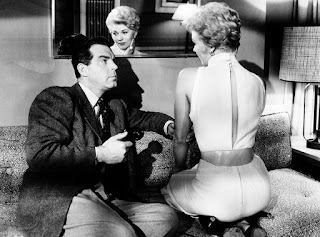 Considering this was her first major film role, Kim Novak comes off well for the most part. She gets several smoldering close-ups, and she's outfitted with a stylish wardrobe. There are times, though, when one senses that the actress is uncomfortable trying to be a seductive temptress. Early on in the movie she tries to put a husky accent on her voice--thankfully she doesn't do this for the entire running time. Novak's Lona seems more like a nervous young girl than a hard-bitten dame (probably due to the fact that this was Novak's first real film part).

PUSHOVER has a subplot involving Sheridan's stakeout partner (Phil Carey) and his interest in Lona's next-door apartment neighbor, an attractive nurse (Dorothy Malone). One could say that Carey and Malone are the "nice couple" counterpart to Sheridan and Lona. Malone's role becomes more important during the climax. Malone is dark-haired here--later in her career she would go blonde and play a number of roles very much like Lona. It's interesting to imagine an alternate version of PUSHOVER with Malone as Lona and Novak as the friendly nurse.

PUSHOVER was made by Columbia and directed by Richard Quine, who uses a stick-to-the-facts semi-documentary style. At one point Lona goes off in her car, and Sheridan tails her...and I automatically thought of a sequence in VERTIGO where James Stewart also follows Kim Novak around in a car. I was reminded of Hitchcock again in the scenes where the cops spy on Novak (and Carey watches Malone) in her apartment from across the courtyard--they bear a certain resemblance to scenes in REAR WINDOW.

I wouldn't call PUSHOVER a brilliant example of film noir--it's fairly easy to figure out what is going to happen in it. It does happen to be a proficiently made film with an engaging cast.