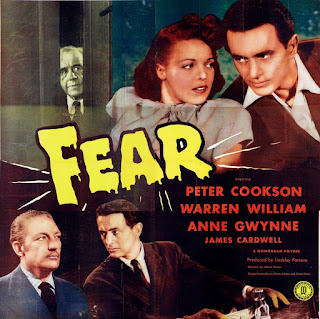 A low-budget version of Dostoyevsky's CRIME AND PUNISHMENT from Poverty Row studio Monogram? It isn't a joke--it's the 1946 film FEAR, which transports the distinguished story to the black & white shadowy environs of the post-WWII American big city.

Peter Cookson plays Larry Crain, a penniless and bitter student. Larry is desperate for money, and he murders a professor who moonlights as a pawnbroker. Before Larry can steal the man's money, he has to leave to avoid discovery. Ironically, Larry's fortunes improve after the murder--an article he wrote obtains him $1,000 from a magazine, he gets his academic scholarship renewed, and he begins a relationship with a kindly pretty waitress (Anne Gwynne). A sense of overwhelming guilt still gnaws at Larry, and this is exacerbated by a outwardly affable but inwardly cunning police captain (Warren William) who is investigating the pawnbroker's murder.

FEAR has plenty of film noir elements to it, and director/co-writer Alfred Zeisler uses plenty of symbolism. The movie has an overall pessimistic tone, due to leading man Peter Cookson. His Larry Crain is a touchy, moody fellow to begin with, and he remains that way throughout most of the film. Because of this it's hard to work up much interest in what happens to him. In the 1935 CRIME AND PUNISHMENT, Peter Lorre commanded the audience's attention, due to his unique screen presence. Cookson (who I really know nothing about) comes off as just another bland B movie actor.

Former Universal Scream Queen Anne Gwynne brightens the film with her naturally appealing charisma. Gwynne is so appealing that one wonders what she is doing hanging around such a gloomy guy like Larry Crain. It's disappointing that after leaving Universal, Gwynne's film career took such a sharp downturn. (While watching FEAR, one does get a nice look at her legs in one scene.)

The King of Pre-Code, Warren William, makes the most of his small role as Captain Burke, even though he appears overqualified for a movie such as this. One wishes that the story had spent more time with William's character instead of the dreary Cookson. A young Darren McGavin has a small part as one of Cookson's college buddies (I didn't even recognize him).

The idea of taking CRIME AND PUNISHMENT and giving it an urban American noirish twist is an outstanding one. Unfortunately FEAR doesn't have the budget, or the leading man, to carry it out. FEAR also has a cop-out ending that negates the rest of the story. It's easy to imagine a major Hollywood studio doing a noir version of CRIME AND PUNISHMENT in the late 1940s with a much more effective star and technical crew.