YOU MADE ME LOVE YOU

YOU MADE ME LOVE YOU is a 1933 British film starring Thelma Todd and Stanley Lupino. I happened to obtain a grey-market DVD copy of the movie. It's a title that deserves a proper American home video release, and is must-viewing for Thelma Todd fans.

The story begins with Stanley Lupino as Tom and Thelma Todd as Pamela encountering each other while their cars are stuck in traffic. Tom falls desperately in love with Pamela upon first sight of her (can't blame him there), and, as an aspiring songwriter, goes home and immediately writes a hit song called "What's Her Name". Tom searches all over London for her, and finds out that she is the sister of an old friend (John Loder). Tom also discovers that Pamela is a spoiled brat--so much so that her father and brother decide to take advantage of Tom's infatuation to get her off their hands. They come up with a plot to convince Pamela that if she does not marry Tom, her father will lose all his money. Pamela goes ahead with the wedding, but she has no intention of being a real wife to Tom--so the fellow decides to tame this shrew in his own crazy way.

YOU MADE ME LOVE YOU is a lively, fast-moving screwball comedy, running only 70 minutes. It's a perfect vehicle for Thelma Todd, since the movie is so reminiscent of the Hal Roach style of comedy the actress knew so well. This is the first time I had ever viewed a Stanley Lupino performance, and here he has a very goofy, light comedic persona. He also gets to sing a couple of songs. Lupino definitely reminded me of Charley Chase--it's easy to imagine a version of this film with Charley in the lead role. (Stanley Lupino was an English music-hall performer, and the father of actress-director Ida Lupino, who would become good friends with Thelma.)

The director of YOU MADE ME LOVE YOU was Monty Banks, who I discovered was a veteran of silent slapstick comedies. There's plenty of traditional movie comedy here, with sight gags, broad characterizations, and plenty of broken household items, courtesy of Thelma's hissy fits. The plot revolves around a classic old movie trope--the goofy guy attempting to win a beautiful woman's hand by totally exasperating her (trust me, in real life this doesn't work). 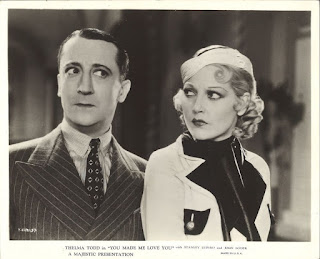 
In many ways the role of Pamela was nothing new for Thelma, but she shows once again why she was one of the great screen comediennes of the period. Her facial reactions and line readings bring out the comic intent of every scene she's in. Many Thelma fans have wished that the actress had not been typecast in so many comedies--but the reason she was is that she was so excellent at it.

As expected, Thelma is devastatingly gorgeous at all times, helped by what seems like about a dozen wardrobe changes. According to various accounts, Thelma thoroughly enjoyed her time in the United Kingdom, despite reports that she collapsed on the set during the making of the film. If not for her untimely demise, Thelma might have very well returned to England in the future for more acting work.

The print that I saw of YOU MADE ME LOVE YOU was in very good condition, showing that the film didn't appear low-budget. YOU MADE ME LOVE YOU was produced by British International Pictures, and many of those involved with the film (such as John Loder and cinematographer Jack Cox) had worked with Alfred Hitchcock. Thelma Todd is blessed with several exquisite black & white close-ups.

It's too bad that YOU MADE ME LOVE YOU isn't well known, or readily available. It's a very fun comedy, and I think it contains one of Thelma Todd's most notable performances.