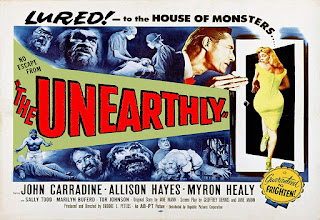 THE UNEARTHLY (1957) is a ultra-low budget crazy combination of science-fiction, horror, and noir. It features elements and plot devices reminiscent from films such as the 1935 THE RAVEN, BOWERY AT MIDNIGHT, VOODOO MAN, and THE BLACK SLEEP.

It is rather fitting that the star of the film is John Carradine, since the story harks back to the many poverty row chillers of the 1940s that the actor appeared in. Carradine plays Dr. Conway, a scientist who is attempting to use glands to prolong human life. Needless to say, he hasn't been very successful in this endeavor. Conway works out of a remote large house, which happens to be fitted out with cells in the basement. These cells are where Conway locks up the unfortunate results of his experiments.

Conway is assisted by a icy attractive young blonde doctor (Marilyn Buferd) who, for some inexplicable reason, happens to be in love with him. He also has a brutish, simple-minded manservant named Lobo (another one of his failed experiments). It won't surprise cult film geeks to know that Lobo is played by the legendary Tor Johnson--but is this the similarly-named character Johnson portrayed in other films?

In his public guise Conway runs a clinic for those suffering special maladies. It is these patients that Conway uses for his experiments. Among the patients the viewer sees are a ditzy blonde (Sally Todd), a jittery addict (Arthur Batanides), and the gorgeous Grace (Allison Hayes). A convict on the run named Mark (Myron Healey) shows up on the grounds, and Conway blackmails him into staying, while also telling him about his mad quest for immortality. (This is where Carradine gets to give the expected mad doctor speech which name-drops various esteemed scientists who were also considered mad.) Unfortunately for Conway, Mark is actually an undercover cop, and eventually brings an end to the doctor's grotesque dream.

THE UNEARTHLY is only 70 minutes long, so it doesn't wear out its welcome. It throws in enough bizarre incidents (and goofy characters) to keep the audience interested. Carradine hams it up quite effectively here (the movie would have suffered if he didn't), and Tor Johnson's Lennie-like Lobo is a hoot, particularly when he's serving cold meals to the patients and telling them when to retire for the day ("TIME FOR GO TO BED!"). Myron Healey's B movie tough guy act is amusing, as is Arthur Batanides' ultra-touchiness. At one point Carradine even gets to perform on an organ that classic horror movie music staple, Bach's "Toccata and Fugue in D Minor", while Healey and Hayes sit serenely on the couch, listening with big grins on their faces.

Allison Hayes fans may be disappointed in her role here, because she's essentially the good girl, and she doesn't get all that much to do, except look fantastic (which she most certainly does). More eye candy is supplied by Sally Todd, who had been a Playboy playmate. She gets to wear the obligatory nightgown and get carried off by Tor Johnson before her character suffers a gruesome fate. Marilyn Buferd is also easy on the eyes--she was a former Miss America--even though her character spends the movie with her hair tied back and wearing a severe dress suit.

The climax of THE UNEARTHLY features an entire cell filled with numerous monstrosities, all victims of Dr. Conway's search for eternal youth. The various makeups were designed by 1950s effects artist Harry Thomas, and they are notable, even though they resemble the creatures from THE ISLAND OF LOST SOULS to a certain extent. One wishes more had been made of this motley group--they are only shown at the very end, and they do nothing but aimlessly lurch about. It would have made perfect sense for Carradine to get his just deserts at the hands of these creatures--or have them engage in a drag-out battle with Lobo--but it doesn't happen.

The producer and director of THE UNEARTHLY is credited as Brooke L. Peters, but it was actually a low-budget filmmaker named Boris Petroff (with a moniker like that, he should have been a horror movie star). The story was written by Jane Mann, who was Petroff's wife.

THE UNEARTHLY is not a great film, or even an underrated one. But it does exactly what it was meant to do--provide an hour or so's worth of goofy entertainment. There's plenty of black & white cheap thrillers that promise much and deliver little. THE UNEARTHLY has a fine cult cast and enough sci-fi/horror zaniness to keep one's attention.