RASPUTIN THE MAD MONK On Blu-ray From Shout Factory 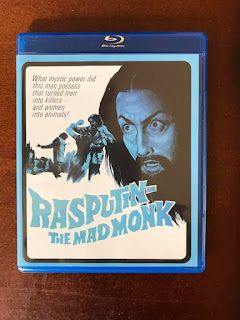 Production began on RASPUTIN THE MAD MONK literally days after DRACULA PRINCE OF DARKNESS wrapped. RASPUTIN reunites four of the main actors from DPOD: Lee, Barbara Shelley, Francis Matthews, and Suzan Farmer. (RASPUTIN is also a mini-reunion of THE GORGON cast, with Lee, Shelley, and Richard Pasco.) While the movie is a fantastic showcase for Lee, it fails to be very historical, or very Russian for that matter. The events that RASPUTIN barely covers need the sweep and the scope of a DOCTOR ZHIVAGO or NICHOLAS AND ALEXANDRA. This was far beyond the budgetary limitations of Hammer.

Nevertheless, RASPUTIN is worthy viewing due to the power of majesty of Lee. His mad monk is a larger-than-life grandiose character, ordering members of the upper class about as if they were peasants, and putting beautiful women under his sway. The scene where Rasputin seduces Barbara Shelley's Sonia, a lady-in-waiting to the Czarina, is one of the most passionate in all of Hammer's history. The best special effects in RASPUTIN are Lee's eyes--they burn out from his face like brilliant headlights, enabling him to put anyone under his spell (Lee has to by far hold the record for hypnotizing the most people on screen).

Lee is so overwhelming as Rasputin that the movie often fails to catch up with him. The mad monk's various debaucheries are mentioned, but we don't really get to see them, and while the conniving mystic is supposed to be a threat to the Russian empire, he only affects a small circle of people in the film. Director Don Sharp and cinematographer Michael Reed try hard to make this film appear far more expensive than it is, but their St. Petersburg just resembles another Hammer Eastern European village, with very English-acting Russian gentry.

The rest of the cast does their best to hold their own with Lee. Richard Pasco and Francis Matthews have their fleeting moments, while unfortunately Suzan Farmer's role is minuscule. Barbara Shelley proves once again she was Hammer's most accomplished female performer, matching Lee's intensity by ably showing that her upper-class Sonia is sexually aroused by being used and degraded by the coarse Rasputin. The movie also features Dinsdale Landen, the husband of two-time Hammer leading lady Jennifer Daniel.

Shout Factory provides two different aspect ratios of RASPUTIN THE MAD MONK on this Blu-ray--a 2.35:1 version and one at 2.55:1. Both prints look exemplary, but in my opinion the 2.55:1 appears brighter and more colorful. The disc has two commentaries, a new one with the now-expected Steve Haberman, Constantine Nasr, and Ted Newsom, and a vintage talk with Christopher Lee, Barbara Shelley, Francis Matthews, and Suzan Farmer.

The extras include a featurette on the making of RASPUTIN, and a program covering the novelizations of various Hammer films. There's two episodes of the good old "World of Hammer" series, dealing with Christopher Lee and the company's costume films. There's also a trailer, TV spots, and a still gallery which features some delectable photos of Barbara Shelley.