X THE UNKNOWN On Blu-ray From Shout Factory 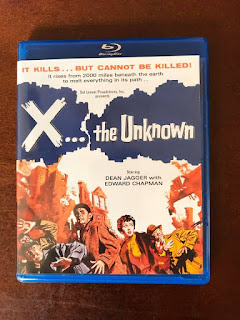 X THE UNKNOWN (1957) was Hammer's first attempt to follow up on the success of their science fiction adaptation THE QUATERMASS XPERIMENT. It was also the debut screenplay of Jimmy Sangster, who would go on to write many of Hammer's most famous films. X THE UNKNOWN is not as beloved as the Hammer Quatermass series, but it is an effective, low budget sci-fi tale, and it has now been released on Region A Blu-ray by Shout Factory.

Somewhere in Scotland, a group of soldiers on maneuvers discover a strange source of radiation underground, a source that kills one man and badly burns others. A quirky scientist named Royston (Dean Jagger), who works at a nearby atomic research laboratory, is called in to investigate. Other victims of radiation poisoning begin to appear throughout the area. Royston theorizes that a being of pure energy has somehow worked its way from deep under the earth's crust, and is feeding on all nearby sources of radiation. Luckily it just so happens that Royston has been experimenting with ways to neutralize atomic blasts--but will he be able to find an answer in time before the energy creature devours the entire atomic facility??

X THE UNKNOWN may have been Jimmy Sangster's first attempt at a full-length screenplay, but it's actually one of his best. The basic premise may be quite fantastic, but the story moves along at such a rapid pace that one doesn't have the time to think too much about it. Everything is shown in a low-key, natural manner, but director Leslie Norman and cinematographer Gerald Gibbs inject a chilly tone to match the crisp black & white photography. There's plenty of suspenseful sequences, and the overall mood is enhanced by James Bernard's frantic, driving score.

What helps the film work is the lack of any time-filler elements--no romantic subplots (no major female characters at all, in fact), no ponderous explanations of any character's background, and no major comic relief (there is some dry humor in spots). Dean Jagger is very good in the lead role. His Royston doesn't make the same vivid impression as Brian Donlevy's Quatermass, but he does seem more like a "real" scientist. (Royston is also far more approachable--and calmer--than Donlevy's Quatermass.) The rest of the cast carries on in the same understated manner--even attention-getting actors such as Leo McKern and Michael Ripper.

X THE UNKNOWN also features some very gruesome makeup effects for the period, such as flesh melting from a victim's skull! The movie doesn't wallow in these effects--they are shown quickly at a few selected spots, for maximum impact. At the climax of the film, the energy creature (which has basically turned into a muddy radioactive goop) resembles a cross between the Blob and Caltiki the Immortal Monster.

I had not seen X THE UNKNOWN in years, and I had never actually owned it on home video. Viewing it on this Blu-Ray, I was struck at how well done the film was...it seemed much better than I had remembered it. It's kind of silly now to call any Hammer movie "underrated", but X THE UNKNOWN has not gotten a lot of attention over the years. It's not a Quatermass film, it's not in color, it doesn't have Cushing or Lee, and it doesn't have a Hammer Glamour girl in it. Whenever the movie is discussed, it usually centers around the fact that Joseph Losey was to have supposed to originally directed it. I wish film geeks would spend less time arguing over Losey's involvement in the movie, and spend more time focusing on the finished project, which is a very interesting and serious science-fiction thriller. Leslie Norman may not have endeared himself to the Hammer production family (according to the sources I have read), but he did a fine and atmospheric job with X THE UNKNOWN.

X THE UNKNOWN was one of the titles released as part of Anchor Bay's famed Hammer DVD series in the 1990s. This Blu-ray is another fantastic print of a Hammer film from Shout Factory, with razor sharp black & white visuals. The sound is excellent as well, and that's very important with this film, which has several audio effects. The back of the Blu-ray case states that the film has a 1.37:1 aspect ration, even though it appears to be 1.75:1 widescreen.

There's not a lot of extras for this Blu-ray. There's a new audio commentary by Ted Newsom, and a original trailer. There is also a brand new--and very welcome--series called "The Men Who Made Hammer", which will continue on future Shout Factory Hammer releases. Produced and directed by Constantine Nasr, the first entry in the series features recollections about Jimmy Sangster from Richard Klemensen, the editor and publisher of LITTLE SHOPPE OF HORRORS, the magazine dedicated to all things Hammer and English Gothic. Klemensen has a unique relationship to Hammer and the people who worked for the company. He was a longtime fan of their films, and through LSOH he got to know several of the company's most notable talents personally. His talk is natural and personable (Klemensen, who I know, is more of a regular Midwestern American than a factoid-obsessed film geek). I look forward to more entries in "The Men Who Made Hammer" series.