THE DEVIL WITHIN HER 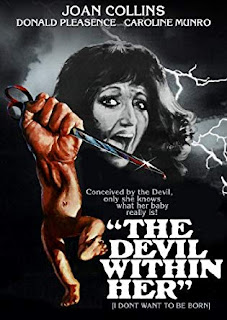 Joan Collins appeared in a number of 1970s horror films: TALES FROM THE CRYPT, DARK PLACES, TALES THAT WITNESS MADNESS, EMPIRE OF THE ANTS....but the weirdest and worst of all has to be a 1975 British production that was known in America as THE DEVIL WITHIN HER.

Why is this one the weirdest and the worst? Let me describe the plot to you. It's about a woman named Lucy, played by Collins, who gives birth to a male baby possessed by evil because she was cursed by a lecherous dwarf while she was working as an exotic dancer.

Need I tell you more?? Don't worry, I'll tell you plenty. THE DEVIL WITHIN HER is just one title this movie is known by. The main British title was I DON'T WANT TO BE BORN, and it was also known as THE MONSTER. For some reason on IMDB the movie is listed as SHARON'S BABY--even though no one named Sharon has a baby in it!

Whatever you want to call it, the movie was directed by Hammer veteran Peter Sasdy, who helmed TASTE THE BLOOD OF DRACULA and HANDS OF THE RIPPER. Sasdy tries hard to make things as realistic as possible here, which might have been the wrong approach, since it just makes the story feel even more ridiculous. It would have been interesting to see what a director like Robert Fuest or Ken Russell would have done with such material.

The movie begins with the birth of the child, and none other than Donald Pleasence is the presiding doctor. If you're thinking that means the doctor has something to do with the baby's evil ways, you're wrong--the man is a decent fellow, and Pleasence is quite restrained in the role. The baby is 12 pounds at birth, and (according to all the characters in the film) grows rapidly, even though the kid looks exactly the same throughout the story. The tot has great strength, and soon begins to bite and claw at people. The little fellow eventually moves up to horrible murders. The baby's nefarious acts are shot in such a way that the viewer never really gets to see him do much--it's the aftermath that is highlighted. It's still hard to think of the tyke as demonic, since every time he's shown, he has a bored expression on his face (maybe he was watching some of the rushes).

If the baby's situation is silly enough, the adult characters are even sillier. Joan Collins spends the film in her usual "angry and distraught" mode, and she doesn't gain much sympathy. Another Hammer veteran, Ralph Bates, plays her Italian husband Gino. Bates tries to affect an Italian accent, but he fails. ("He'sa bay-bee! A BAY-bee!!"). Why is Gino an Italian? So he can have a sister who just happens to be a nun, and who also happens to be able to perform the climatic exorcism.

There's plenty of other English Gothic notables here, such as the lovely Caroline Munro as Joan's best friend. Unfortunately she doesn't get much to do, and sadly, she's dubbed (as she would be far too many times in her movie career.) Caroline's character works at the same strip club that Joan's character used to, but don't get excited--she doesn't perform. Caroline does wear a bustier in one scene.

Janet Key (DRACULA A.D. 1972, AND NOW THE SCREAMING STARTS), plays a doomed nanny, and the nasty dwarf is played by George Claydon, who was the circus midget in BERSERK. Speaking of the dwarf, it's never explained why he has the power to curse a woman's future child--I was expecting to find out that he was a practitioner of the occult, or that he came from some notorious Eastern European family, but we get nothing. (If he does have such powers, why does he stay at his job of being a freakish mascot at a seedy strip joint??)

We do get to see the dwarf feel up Joan Collins, and we also get to see a sex scene between Joan and Ralph Bates (who is promptly killed off right after it). The movie actually could have used more such craziness, because it doesn't get truly bad enough to fit under the Ed Wood level. There's a lot of scenes filmed in actual London street locations--maybe Peter Sasdy was trying to inject some verisimilitude into such a fantastic tale, but I think he was just trying to pad out the running time. Ron Grainer's music score doesn't help things--it seems to have been written for an entirely different film.

It's hard to see how anyone--or anything--could have made THE DEVIL WITHIN HER a better movie. Which leads to the question...how in the heck did this film get made to begin with?? With all the talent involved in front of and behind the camera, didn't anyone connected to the production stop and think, "Hey, this isn't going to work"?? Obviously, this film was meant to take advantage of the success of ROSEMARY'S BABY and THE EXORCIST, but it winds up being one of the many genre titles of the Seventies that leaves the viewer in a state of puzzlement....as in "What the hell was that supposed to be??"
Posted by Dan Day, Jr. at 12:24 PM