THE SPECIALISTS On Blu-ray From Kino 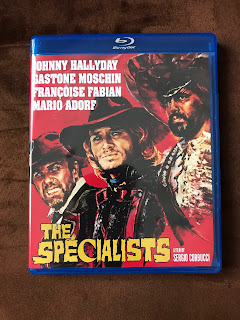 THE SPECIALISTS (1969) is one of Sergio Corbucci's lesser known Euro Westerns. It's not on the same level as the director's DJANGO or THE GREAT SILENCE, and it doesn't have any major spaghetti western or American stars. The main character is in fact played by a French pop star called Johnny Hallyday (the movie was in fact an Italian-French-German co-production).

It must be stated that Hallyday does look the part of taciturn loner and renowned gunman Hud Dixon. Hud rides into the town of Blackstone seeking revenge for the lynching of his brother, who was blamed for the theft of all the money in the town's bank. Hud finds out his brother was the victim of a grand conspiracy, and he has to navigate around several unsavory characters to get to the bottom of things. Just when Hud thinks he's gotten his final revenge on all of the townspeople who have set up his brother, he has to save them from a bizarre threat.

THE SPECIALISTS is a very strange film, even for Euro Western standards. For much of the story the movie plays out like a somewhat traditional Western. Hud spends most of his time having to deal with an upright sheriff (Gastone Moschin), and their relationship is similar to a subplot of Corbucci's RINGO AND HIS GOLDEN PISTOL. There's a number of quirky characters that are introduced, including a one-armed Mexican bandit (Mario Adorf), a sexy widow who runs the bank that was robbed (Francoise Fabian), and a quartet of young hippie-like vagabonds. These folks are treated in an almost lighthearted manner, which makes the climax of the film so jarring.

The last third of the film has such a different tone that it feels as if a different writer came out of nowhere and provided the scenes. (Corbucci is credited as co-writer as well as director.) The quirky characters all turn out to be vicious threats, and the violence is ramped up considerably. Not only are the citizens of Blackstone denied their money, they are put through a shameful collective embarrassment, courtesy of the now-brutal vagabonds. This last affront has to be seen to be believed--but even then one finds it hard to accept it.

The outdoor sequences of THE SPECIALISTS were not shot in Spain--they were instead filmed in the Dolomites, giving the movie a greener appearance then most Euro Westerns (Corbucci always tried to make his various westerns look distinct from one another). Cinematographer Dario Di Palma gives the film a fine visual quality, and A. F. Lavagnino provides an eclectic music score. As is customary with any Corbucci title, there's several tightly-edited and proficiently staged action scenes.

Kino presents THE SPECIALISTS in an excellent 2.35:1 transfer, with either Italian or French audio along with English subtitles. The movie on this disc is the original unedited version.

The main extra is an another audio commentary by director and spaghetti western fanatic Alex Cox. He gives all the pertinent details about the movie's production, and attempts to analyze why the supposed left-leaning Corbucci went out of his way to make the hippie-like characters in this film so unattractive. Cox's talk is worth listening to. A series of trailers for other Euro Westerns released by Kino are also included.

THE SPECIALISTS is a solidly made film from all technical aspects. It suffers, in my opinion, from a climax that feels like it comes from another movie altogether (others may find the ending diverting). It is worth owning for hardcore Euro Western buffs.
Posted by Dan Day, Jr. at 11:54 AM