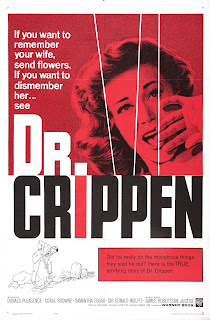 The outstanding character actor Donald Pleasence gets to have a leading role, and a romance with a beautiful young woman as well, in the 1962 historical drama DR. CRIPPEN.

In 1910 England, Dr. Hawley Harvey Crippen was convicted of murdering his wife and later executed by hanging. The trial and details of the crime were something of a trending topic at the time, and the case has been referenced in several detective stories and murder mysteries.

The movie DR. CRIPPEN sticks mostly to the facts, or at least to a very straightforward interpretation of the case. The film is technically set during Crippen's trial, but many lengthy flashbacks tell the majority of the story. Dr. Crippen (Donald Pleasence) is a meek, mild-mannered fellow stuck in a frustrating marriage with a former music hall performer (Coral Browne). Mrs. Crippen is a coarse, overbearing woman, and the doctor starts to have an affair with his much younger typist Ethel (Samantha Eggar). Crippen gives his wife an overdose of sedatives (the film suggests that it was an accident), and after her death, he tells her friends that she has left him and gone to America. The police start to investigate, and a worried Crippen decides to flee with Ethel to North America. While on the boat crossing the Atlantic, Crippen  assumes an alias, and Ethel disguises as his young son. But the ship's captain recognizes them, and the pair are taken into custody upon reaching Canada.

I had assumed that DR. CRIPPEN was a film produced by the Baker-Berman team, the same men who made such historical horror films such as JACK THE RIPPER (1959) and THE FLESH AND THE FIENDS. Baker-Berman had nothing to do with DR. CRIPPEN--the movie was directed by Robert Lynn and written by Leigh Vance. Lynn had done a lot of television, and it shows here--the story at times plays like a PERRY MASON episode set in 1910. The 1.37:1 aspect ratio and the jaunty music score by Ken Jones also contributes to the small-screen feel.

For a movie based on such a notorious murder case, DR. CRIPPEN comes off as rather tame. The more salacious aspects of the case, such as Crippen dismembering his wife and burying her body underneath the floor of their house, are alluded to, but not shown or even thoroughly discussed. At one point it is mentioned that after his wife's death, Crippen was seen going to parties and showing off his true love Ethel, but we are not shown this either (and we should have been). There's a rather dry tone to the proceedings--after watching this film one starts to wonder why Dr. Crippen went down in history as such a nefarious murderer.

Donald Pleasence doesn't play Crippen as hot-headed, angry, or cunning--here the doctor is portrayed as the ultimate milquetoast. The very first time we see Crippen dealing with his wife, with his slumped shoulders and hangdog expression, we know exactly how things are going to play out. Pleasence's Crippen is at all times quiet and tightly controlled, and the viewer waits to see when he is going to snap--but he never does, even when he gets caught, or even while awaiting his execution. Pleasence is well-remembered for his acting eccentricities, but here he tamps down on them and capably shows how Crippen has had all his emotions sucked out of him.

What passion the movie does have comes from Coral Browne as the florid Mrs. Crippen. Browne gets the showiest role, and she plays it to the hilt. What's interesting is that while Mrs. Crippen admits she doesn't think her husband is all that attractive or engaging, she's more annoyed by the fact that he doesn't perform his "husbandly duties" enough. (It's suggested that Crippen is so disgusted by her that he can't perform this function...at least not with her.)

Samantha Eggar is a delicate, almost ethereal Ethel. The script makes the case that Ethel did not know that Crippen killed his wife (in the actual trial she was acquitted of accessory to murder but many crime buffs believe otherwise). Eggar was twenty years younger than Pleasence, and it's hard to figure out why her Ethel is so besotted with Crippen. (Maybe there's hope for guys like me yet.) When Eggar is disguised as Crippen's "son", during their shipboard flight from England, she winds up like every other young attractive actress who tries to pretend to be a boy in a movie or a TV show--she looks even more feminine. Crippen and Ethel's attempt to disguise themselves might seem like silly script writing, but that's actually what they did in real life. Eggar and Pleasence make one of the most unlikeliest romantic couples in screen history. (My friend, prolific audio commentator Troy Howarth, reminded me that Eggar and Pleasence had another unusual onscreen affair in THE UNCANNY.)

Most British films made when DR. CRIPPEN was produced usually have a very strong supporting cast. This film doesn't--about the only notable names are Donald Wolfit and James Robertson Justice. The most impressive name among the film's crew is that of cinematographer Nicholas Roeg, who, due to the generic black & white style of the production, doesn't get a chance to show off his visual talents. (Roeg would have been much better suited to direct the film.)

For most movie or TV adaptations of real-life murder stories, the more outlandish elements of the case are played up or heavily scrutinized. DR. CRIPPEN takes the opposite tack, seemingly wanting to avoid the more prurient aspects of the affair. One can only speculate what a company like Hammer Films could have done with the event.
Posted by Dan Day, Jr. at 1:27 PM