THE HELLBENDERS On Blu-ray From Kino 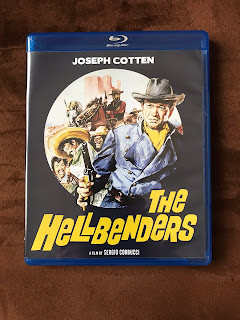 Kino Lorber has put out another series of Euro Westerns on Region A Blu-ray, including THE HELLBENDERS, released in 1967 and produced by Albert Band and directed by Sergio Corbucci. The film is also known as THE CRUEL ONES and I CRUDELI.

Soon after the end of the Civil War, a Union convoy carrying nearly a million dollars of cash is attacked by Colonel Jonas (Joseph Cotten) and his three sons. The embittered colonel plans to use the money in a mad scheme to resurrect the Confederacy. The Colonel and his sons travel west, with the money placed in a coffin. Jonas tells all those they encounter that the coffin contains the body of his son-in-law, killed in battle, and he coerces a saloon girl (Norma Bengell, PLANET OF THE VAMPIRES) to pose as the grieving widow. The group has to trick their way through Union patrols, trusting townspeople, Mexican bandits, and Native Americans to try and get to their destination--but their biggest obstacles are each other.

THE HELLBENDERS is probably best known for Ennio Morricone's mournful original music score (which I am listening to on vinyl as I write this). Morricone's music (which is credited to "Leo Nichols" on the movie's main titles) perfectly fits the somber mood of the story. This isn't a rip-roaring, wild action-packed tale. It has a downbeat tone, with the only sympathetic character being Norma Bengell's Claire. Colonel Jonas and his sons are not the type of people you want to take a long trip with. The youngest son, Ben (Julian Mateos) seems to have doubts about his father's unrealistic plan, and he falls for Claire, but in the end his loyalty to his family still takes precedence over everything else.

Joseph Cotten might seem out of a place in a spaghetti western, but he gives a fully committed and deadly serious performance as Colonel Jonas. Despite his frequent references to the Almighty, Jonas is a cold-blooded and unyielding individual who will stop at nothing in his futile quest to re-establish "The Cause". The Colonel has to know that all he's really doing is driving his entire family to destruction--but with the defeat of his beloved Confederacy maybe that's what he actually wants to do in the first place.

Sergio Corbucci and cinematographer Enzo Barboni (who would later direct the original TRINITY films) give THE HELLBENDERS an expansive look, with many fine compositions. (In his audio commentary Alex Cox points out that the film has very few interior scenes.) The movie also features spaghetti western legends Aldo Sambrell and Al Mulock in small but important roles. THE HELLBENDERS is a very well made picture, and it's nowhere near as crazed as many Euro Westerns. But the setup is unusual--the Colonel and his sons would be supporting villains in most other movies, and here they are the main characters. There is a climatic twist that makes the Colonel get exactly what he deserves.

Kino presents THE HELLBENDERS in 1.85:1 widescreen, with a colorful and clear transfer. The only audio option is the English track, where thankfully Joseph Cotten dubbed his own voice.

The only extra, other than a collection of trailers for other Euro Westerns released by Kino, is an audio commentary by director Alex Cox. Cox is an expert on Euro Westerns, and his talk is enthusiastic and knowledgeable. Cox gives an effective analysis of Sergio Corbucci's style, and he even suggests that THE HELLBENDERS might even be called a masterpiece.

I wouldn't rate THE HELLBENDERS that highly, but it is a well done and unique Euro Western, and it features one of Ennio Morricone's best scores.
Posted by Dan Day, Jr. at 8:51 AM