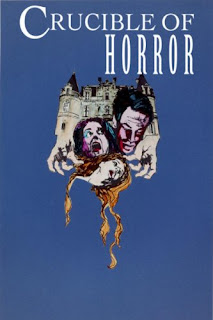 CRUCIBLE OF HORROR is the American title for this 1969 British production. In England it was released as THE CORPSE. The American title makes one expect a blood & thunder Gothic chiller--but it is actually a contemporary psychological suspense tale.

CRUCIBLE OF HORROR centers around the Eastwood family. Walter, the father, (played by Michael Gough) is a very uptight and fastidious businessman who mentally and physically abuses his wife Edith (Yvonne Mitchell) and teenage daughter Jane (Sharon Gurney). Son Rupert (Simon Gough, the real-life son of Michael) takes after his father. The Eastwood women conspire to kill Walter, and while he is off on a hunting trip, the ladies surprise him at the family cottage and appear to poison him. But Walter seemingly isn't dead--or is it that the Eastwood women are so emotionally scarred that they have no idea what is real and what isn't?

This movie is not filled with gory or violent shocks. It's a story that takes its time, with director Viktors Ritelis building up the relationships in the dysfunctional Eastwood family. Much of the first part of the film consists of some painfully awkward family dinners (these sequences have a darkly humorous edge to them as well). Daughter Jane appears to be rebelling against her father's controlling behavior, while wife Edith appears to have all the life sucked out of her--she moves about like a zombie when she's not hiding away and creating disturbing artwork. The elder Eastwood is totally in charge, a man who expects things to be done exactly the way he wants them (he's the type of person who still wears a suit and tie even while at home after a day's work).

One would expect an actor like Michael Gough to really go to town with a character like Walter Eastwood, but this isn't the wild and wacky Gough we've seen in the Herman Cohen flicks. Gough as Walter is cold, cynical, and incisive, without going off the rails. Walter Eastwood is far more threatening than Gough's usual horror movie characters because he's a person that could actually exist. This is one of Michael Gough's best film performances.

CRUCIBLE OF HORROR might be frustrating to first-time viewers, because there is plenty of ambiguity in the second half of the story. If you like movies that make perfect absolute sense, this one is not for you. I'm not going to reveal how the movie ends, and even if I did, how one sees the ending depends on one's interpretation of it. For me personally, I felt that since most of the story is seen through the eyes of Edith and Jane, one must not take at face value what they think they are experiencing--these are two women who have serious mental issues. But that's just my way of analyzing it.

While doing research on this film I came across a few reviews that suggested that it had a feminist slant to it. One could certainly come to that conclusion, especially from a 21st Century viewpoint. I found it to be an effective example of how much damage one family member can do to others, without the presentation having to go to extremes. We all love Michael Gough's more outlandish film portrayals, but CRUCIBLE OF HORROR shows just how fine of an actor he really was.

*NOTE: Simon Gough and Sharon Gurney married each other in real life.
Posted by Dan Day, Jr. at 10:34 AM