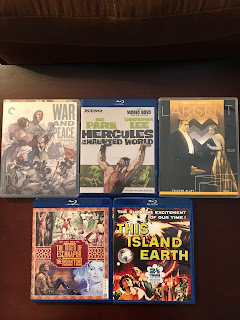 Time once again to list my top five Blu-rays of the year (no DVDs this time).

This is the eighth year in a row I have done a list like this, so, if you are a regular reader of this blog, you know the drill. All the entries in this list had to have been released in the calendar year, and they are all ones I have purchased.

There's no point in going into my annual "I spend way too much money on movies" rant. There were a number of notable releases I did not get, such as the Criterion Godzilla set and the Shout Factory Abbott & Costello set.

Speaking of Shout Factory, I bought so much of their product this year they should just give me the Abbott & Costello set. In my last post I mentioned how many of the company's Hammer releases I bought, and they had a number of enticing Universal products as well. Shout Factory makes this list with a non-Hammer title.

1. WAR AND PEACE from Criterion
A mammoth, four-part, 422 minute Soviet epic based on the Leo Tolstoy novel.  Sergei Bondarchuk's grand combination of the majestic and the intimate was one I had never seen before. I wrote a full post on it in July.

2. HERCULES IN THE HAUNTED WORLD from Kino
It seems like every year a Mario Bava release winds up on this list. Kino does justice to Bava's phantasmagorical adventure by providing three different versions of the film, all based on a gorgeous looking print. I wrote a post on it in October.

3. L'ARGENT from Flicker Alley
A stupendous 1928 silent production from France, this is a film I literally had no knowledge of. It's a sweeping tale of greed and power, with the added bonus of a wonderfully sultry performance from the mysterious beauty of METROPOLIS, Brigitte Helm. I extensively covered it in September.

4. THE TIGER OF ESCHNAPUR and THE INDIAN TOMB from Film Movement
I didn't get around to writing a full post on this, but I should have. It's a two-film colorful action adventure story set in a fantastical version of India. The films were made in the late 1950s, and they were directed by Fritz Lang. They are sort of a throwback to the large-scale super productions Lang made in Germany during the silent era. I had never seen these, and both films are entertaining, if a bit on the slow side (they also have no humor whatsoever). Both films look spectacular on this release (star Debra Paget in particular looks unbelievably stunning). Film Movement went all out to provide a proper showcase for this pair of films.

5. THIS ISLAND EARTH from Shout Factory
There are any number of Shout Factory releases I could have put on this list, but I chose this one, simply because this science-fiction classic deserved the special treatment it got on this release. I wrote a full post on it in July.
Posted by Dan Day, Jr. at 10:56 AM