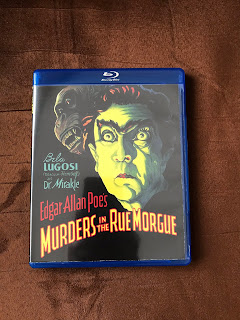 Earlier this year Shout Factory began issuing Blu-ray sets of various classic Universal horror films. One movie that they decided to give an individual release to is the 1932 version of Edgar Allan Poe's famous tale, MURDERS IN THE RUE MORGUE.

Universal's MURDERS IN THE RUE MORGUE has for the most part been looked upon as a stepchild to the studio's more celebrated original 1931 versions of DRACULA and FRANKENSTEIN. Director Robert Florey and actor Bela Lugosi had both been attached to FRANKENSTEIN during its pre-production, but they wound up being assigned to the adaptation of the Poe story instead. MURDERS IN THE RUE MORGUE went through several rewrites and even some re-shoots, and the result is a rather disjointed affair.

Robert Florey and his cinematographer, the legendary Karl Freund, do give plenty of expressionist atmosphere to the film's 1845 Paris setting. But they also spend way too much time on romantic leads Sidney Fox (who is billed above Lugosi on the opening main credits) and Leon Waycoff (known later in his acting career as Leon Ames). Fox and Ames make one pine for David Manners and Helen Chandler.

Far and away the major highlight of MURDERS IN THE RUE MORGUE is Bela Lugosi, who literally is a show in himself as the mad Dr. Mirakle. Sporting a dark frock coat, high hat, unibrow, and wild perm, Bela gives one of his most magnificent performances. Sadly, the script does not take full advantage of this--Bela is killed off before the final scenes. Lugosi's Mirakle is not only a proponent of evolutionary theory, he's also determined to mate his gorilla, Erik, with a woman. Charles Gemora plays Erik in an ape costume, but the effect is ruined by many closeups of an actual chimpanzee which are haphazardly inserted throughout the story.

MURDERS IN THE RUE MORGUE is definitely a product of the Pre-Code era, with such elements as evolution, cross-breeding, and Parisian women of the streets ("Profession?" "Yes.") Lugosi's Mirakle isn't so much turned on by the leading lady as by the fact that his gorilla is turned on by her. The production is a strange combination of the sordid and silly, with Bela being its saving grace.

MURDERS IN THE RUE MORGUE has been released several times before on home video, but this transfer on the new Blu-ray is stunning, with very sharp and distinct black & white picture quality. The sound is sharp and distinct as well.

The extras are a rather murky re-release trailer and two brand new commentaries. Esteemed classic horror film historian Greg Mank gives a thorough and entertainingly informative discussion on the film in his own inimitable way. Lugosi expert Gary D. Rhodes spends most of his talk on the film's various antecedents, such as the work of Edgar Allan Poe, the evolution debate in early 20th Century American society, and the uses of gorilla characters in silent cinema. The reverse of the disc cover features an alternate poster for the film.

I wouldn't rank MURDERS IN THE RUE MORGUE among the best of the Universal horror classics, but it deserves a place in American Gothic cinema history simply due to Bela Lugosi. I think Shout Factory recognized this, and that is why they just didn't put it out as part of a box set.