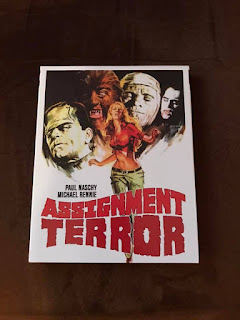 ASSIGNMENT TERROR (1969) is a truly wild & wacky slice of Euro Gothic, a movie that is something of a cross between HOUSE OF FRANKENSTEIN and INVASION OF ASTRO-MONSTER. I first saw it on "Son of Svengoolie" back in the 1980s. It's a mad movie monster romp, and now the film has been given an official Blu-ray release courtesy of Ronin Flix and Scorpion Releasing.

This production was known as LOS MONSTRUOS DEL TERROR in Spain, and that country was the birthplace of the film's writer and star, Paul Naschy. Horror film legend Naschy first played his signature role of Waldemar Daninsky, El Hombre Lobo, in the 1968 movie LA MARCA DEL HOMBRE LOBO, better known in the U.S. as FRANKENSTEIN'S BLOODY TERROR. ASSIGNMENT TERROR was meant to be a follow up to Naschy's werewolf debut.

Naschy (who wrote the script under his real name, Jacinto Molina) not only brought back the werewolf Daninsky, he also included a vampire, a mummy, and a sort-of Frankenstein Monster. He also decided to bring aliens into the plot as well. A group of beings from the planet Ummo are attempting to take over Earth by using legendary supernatural creatures. The small group of aliens, in human form, are led by Michael Rennie (who doesn't have Gort to help him this time around). As expected, the plan goes awry, due to the aliens being influenced by human emotions and the monsters being uncontrollable.

Naschy's script for ASSIGNMENT TERROR was quite ambitious, and the result is that the movie bites off more than it can chew. The production was beset by several difficulties, with multiple directors, budget problems, etc. Naschy sets up a number of promising ideas, but they are never properly carried out. The grey-faced vampire (who is not Dracula--he's referred to here as "Count Janos") isn't particularly threatening, and the green-faced Farancksalan Monster looks like something somebody whipped up for a comedy skit. This film's mummy is actually rather impressive, and he's blessed with the best makeup job out of all the creatures. Naschy is his usual energetic self as Waldemar the werewolf, and he gets to have a tragic romance with a lovely blonde played by Diana Sorel. Naschy also gets to fight both the mummy and the Farancksalan Monster (his battle with the undead Egyptian is very well done).

ASSIGNMENT TERROR featured an international cast--along with Michael Rennie, there's German-born cult actress Karin Dor, and Americans Patty Shepard and Craig Hill. The film should have turned out much better than it did, but it never seems to come together. It has abrupt changes in tone, and the characters discuss incidents that are not shown (one assumes that parts of the script were not filmed to save money). Despite all of its problems, I can't help but have a certain affection for it. It is goofy as all get out, but it's endearingly goofy. Paul Naschy truly loved classic horror cinema, and his enthusiasm for the genre cannot be questioned, even though circumstances many times went against him when he tried to pay tribute to it onscreen. ASSIGNMENT TERROR is a perfect Saturday afternoon or late night monster flick, and it should be judged in that manner. (Naschy's later horror films would be far more brutal and explicit.)

ASSIGNMENT TERROR is getting its official American widescreen home video debut with this Blu-ray (which is listed as Region A). The movie is uncut, and presented in a 2.40:1 anamorphic aspect ratio. This title has had several unlicensed releases, and there's many versions of it on YouTube, but this glorious transfer tops them all. It's quite colorful, and it also brings out the inherent weaknesses of the monster makeups. The Spanish dialogue track is provided in stereo, with English subtitles, along with the English dub track in mono.

There's many extras here, such as multiple alternate opening title sequences, and different trailers (including some from other Paul Naschy horror films). There's an extensive stills gallery, which showcases the many other titles the movie was known as in various countries. The reverse of the cover sleeve features an examination of the film's production history written by Mirek Lipinski.

The most important extra is an audio commentary by Euro Gothic expert Troy Howarth, who is the author of a book on Paul Naschy and his films. Howarth has a lot of ground to cover here, and he does it very effectively. He details the making of the film, the multinational cast, and he even covers Paul Naschy's overall film career. Howarth appreciates the film for what it is, but he also mentions the film's shortcomings without being too critical or sarcastic.

This is a fabulous release, giving an offbeat cult film the prime treatment it deserves. I ordered this Blu-ray direct from Ronin Flix, and I must mention their great service--I received the disc only a few days after I purchased it from the company's website.