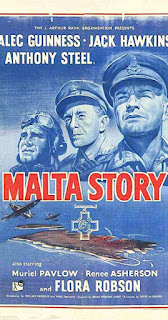 MALTA STORY is a 1953 British WWII drama, dealing with a campaign during the conflict that many may not be familiar with.

The small island of Malta in the Mediterranean was the subject of unrelenting bombing attacks by the Axis powers, due to its serving as a base for British military forces. The story opens in 1942, with a  Royal Air Force transport plane landing on the island in the middle of a heavy bombing raid. One of the passengers, a photo-reconnaissance pilot named Peter Ross (Alec Guinness), is supposed to go on to Cairo on the same plane, but the craft is destroyed while on the runway. The air commander of the island (Jack Hawkins) decides to use Ross to help Malta's beleaguered forces. The bombing of the island becomes more and more intense, and rumors begin of an upcoming invasion by Axis forces. The island's population gets some relief from a few convoys of supplies that barely make it through, while Ross falls for a beautiful Maltese girl (Muriel Pavlov) who works in a RAF operations room.

MALTA STORY is very much a "stiff upper lip" type of war tale that British filmmakers do so well. It is in black & white, and director Brian Desmond Hurst uses a semi-documentary style. There's plenty of real WWII footage spliced into the action, and the production is helped by location shooting on Malta, along with the use of real Spitfires (despite the fact that they are types made after 1942). The movie makes extensive use of models during the air battle sequences, and while these shots do not look realistic today, one must make allowances that this is a 65-year old film.

The movie's low-key, realistic tone extends to the actors and the storyline. Alec Guinness isn't a hot-shot flyboy--he's a soft-spoken photo-recon pilot (and archaeologist in civilian life) who never engages anyone in combat. If MALTA STORY had been a Hollywood film, Guinness' character would have been complaining about being stranded on the island, or he would have been arguing with his superiors, or he would have developed a rivalry with another pilot. None of that happens here--Guinness accepts his fate and gets on with the job, no matter what the circumstances. The only subplot in the movie that seems contrived is one involving Guinness' girlfriend's brother (but according to my research even this character was based on a historical one).

The script takes great pains to show the resiliency and courage of the Maltese people. It does this in a manner that avoids overly dramatic histrionics (although there are times where it seems the civilians are a bit too adjusted to being under a months-long siege). History buffs will appreciate how the movie relates the actual incidents involving the island in the Mediterranean theater of war in a clear and concise manner. (When Guinness has his first meeting with his new CO, Jack Hawkins goes to a map of the area and explains the situation, allowing the audience to understand as well).

MALTA STORY is a very good--and very British--WWII tale that doesn't have big moments that factor into other major war epics. The main character isn't a larger-than-life action hero who accomplishes things on his own--he's a quiet professional who is part of a team. The movie also goes against the grain in that it features an unexpectedly downbeat ending.