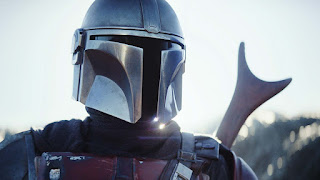 I finally got to see the first four episodes of the Disney+ series THE MANDALORIAN over Thanksgiving weekend, courtesy of my brother Robert. (For those of you who are wondering, I have not subscribed to Disney+--if any of you would like to purchase it for me, go right ahead.)

THE MANDALORIAN is set in the Star Wars Universe, a few years after the events of RETURN OF THE JEDI. The series concerns the adventures of a galactic bounty hunter only known as--you guessed it--the Mandalorian (played by Pedro Pascal). The title character is a mysterious, taciturn fellow, and during the first four episodes the viewer is given almost no backstory about him (or her?), except for a few snippets here and there. The show was created by Jon Favreau, and he is the main writer on the early episodes.

Many have compared THE MANDALORIAN to a Western, and while that is apt, I would go further and compare it to a Spaghetti Western. The Mandalorian operates on dry, sparsely populated backwater planets that reminded me of the locations used in many a Euro Western. The title character, while laconic, is also deadly proficient in all sorts of weaponry. He's also quick witted, and the audience never really knows what he's all about--he's definitely influenced by Clint Eastwood's Man With No Name. Reinforcing the Spaghetti Western vibe are the many quirky characters the Mandalorian encounters. The eclectic music score for the show, credited to Ludwig Goransson, is more Morricone than John Williams.

I'm not going to get into any plot details of the individual episodes, because I am sure that there will be those reading this post who have not seen the show yet. (If you've been on the internet at all during the past week or so, chances are you know way too much about it already.) I will say that THE MANDALORIAN has plenty of references to Star Wars lore--some obvious, some quite geeky. Episode Four is basically a retelling of the plot of SEVEN SAMURAI, with a bit of SHANE thrown in.

What I most appreciate about THE MANDALORIAN is that it avoids the rushed, overly-edited attitude of today's sci-fi/fantasy blockbusters. The multi-part format allows the show to take time to tell its story (so far the episodes have run about 35-40 minutes each). The more traditional editing style means the viewer also gets a chance to revel in the many impressive visual compositions each show has. While I was on Google looking up a image for this blog post, I saw a headline from The Hollywood Reporter that asked, "Why Is The Mandalorian So Slow?" My response to that is "Why are certain people so dumb?"

The show (so far) has a very "used universe" look and feel to it. This is a galaxy that has just been through a major war between the Empire and the Rebel Alliance, and things are still very much in flux. There is some CGI, but the show doesn't wallow in it--you never feel as if you are watching a video game.

I'm an original Star Wars fan--I have been obsessed with it since the very first film came out in 1977. THE MANDALORIAN, in my opinion, is a proper Star Wars entry. I'll even come right out and say it has more of a real Star Wars feel to me that either THE FORCE AWAKENS or THE LAST JEDI. When I first heard about the show I thought the main character was going to be nothing more than a Boba Fett clone, but this bounty hunter is much more than that.