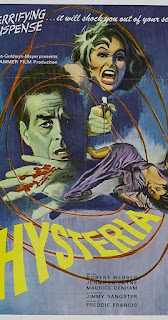 I haven't seen every movie made by Hammer Films. There's still plenty of titles that have eluded me, including most of the company's output before they produced THE CURSE OF FRANKENSTEIN. I was able to partake in a personal Hammer debut last night, courtesy of Turner Classic Movies. The cable channel showed HYSTERIA, a 1965 film written & produced by Jimmy Sangster and directed by Freddie Francis.

HYSTERIA is part of a mini-series of black & white psychological thrillers, usually written by Sangster and directed by Francis, that were made at Hammer in the early 1960s. Other titles in the group include TASTE OF FEAR, PARANOIAC, MANIAC, and NIGHTMARE. The movies were influenced by Alfred Hitchcock's PSYCHO and Clouzot's DIABOLIQUE.

All the Hammer psychological thrillers share the same basic plot device--and if I revealed this plot device, I'd give away the twists for all the people who haven't seen these movies. (So I won't).

I own several books & magazines on Hammer Films, and I don't think I've read a positive review of HYSTERIA in any of them. It's not a bad film, but there's nothing in it that makes it extraordinary--especially if you've seen the other Hammer psychological thrillers (which are much better).

Robert Webber plays an American who is in London recuperating from a car crash. He is suffering from amnesia (the character is referred to as "Chris Smith"). Upon checking out of the hospital, Smith finds out his bills have been paid, and he's been set up in a luxury suite in a large apartment building. Smith's only clue to his past is a torn photo of a fashionable woman (whenever there's a man suffering from amnesia in a movie or a TV show, there's always a mysterious beautiful woman who holds the key to what is going on). Smith tries to track her down, only to be told that she's dead. But he keeps seeing her, and he keeps hearing strange voices while in his apartment--even though the rest of the building is supposedly empty. Of course, there's plenty of things going on that one doesn't expect (unless you've watched and read a lot of mysteries).

HYSTERIA doesn't have the typical Hammer cast. Robert Webber is more of a character actor than a leading man type. I've seen him in a lot of movies and TV shows from the 60s and 70s, and he almost always played a bad guy. He even has that type of vibe here, especially when he starts to "remember" and these thoughts are dramatized to the viewer--they show that Smith is something of a con man. An actress named Lelia Goldoni (who I am not familiar with) plays the "mystery woman", and the fine British character actor Maurice Denham steals the film as an eccentric private investigator who is hired by Smith. English Gothic fans will notice among the supporting cast Peter Woodthorpe (THE SKULL), Sue Lloyd (CORRUPTION), Jennifer Jayne (DR. TERROR'S HOUSE OF HORRORS), and, the man who played the Frankenstein Monster in the Freddie Francis-directed THE EVIL OF FRANKENSTEIN, Kiwi Kingston. (I don't wish to be mean, but he doesn't look so good without makeup either.)

What makes HYSTERIA a lesser Hammer entry is that it has a 60 minute plot that is stretched out to about 90 minutes. There's much footage of Robert Webber wandering around, looking puzzled. The scenes of Smith's "past" might be to make the audience doubt the man's intentions, but they also seem to exist to pad the story. Freddie Francis and cinematographer John Wilcox give the film a crisp, efficient look, but they're not able to get much suspense out of the script. The best idea in the movie is Smith living all by himself in a modern high-rise apartment complex. Personally I find that more creepy than having to stay in a lonely old house--but the film never really takes advantage of it (I think the main reason for Smith's living arrangements was to keep the budget down). There's also an attempt at a PSYCHO-like shower scene, but it's very underwhelming.

If you are familiar with this type of material HYSTERIA will hold no surprises for you. The main twist is easy to anticipate (at least it was for me). There's another twist at the end that should cause a viewer to rethink what they have just watched, but it just seems tacked on. A more interesting leading man might have helped (Oliver Reed, maybe?). This is probably the least of all of Hammer's psychological thrillers--it gets nowhere near the emotional level of its title.
Posted by Dan Day, Jr. at 3:10 PM