WEREWOLF IN A GIRLS' DORMITORY On Blu-ray From Severin 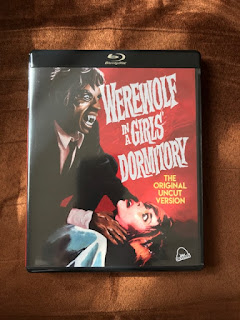 WEREWOLF IN A GIRLS' DORMITORY is the American name for a 1961 Italian/Austrian production originally titled LYCANTHROPUS. The Euro horror has been given a special Blu-ray release courtesy of Severin Films.

WEREWOLF IN A GIRLS' DORMITORY may be a silly title, but it's a memorable one, and it has enabled the film to have a long shelf life. Actually the movie isn't near as lurid as the title makes one expect (if it had been made about ten years later it certainly would have been far more explicit).

The film feels more like a German krimi thriller than a straight horror tale. Like most krimis, it is in black & white, and it's set in contemporary England (even though none of the cast or the locations look remotely English). The story contains murder mystery, science-fiction, and Gothic elements.

A English reformatory (not dormitory) for young girls is beset by a series of gruesome murders. The killings seem to have been perpetrated by a wolf--or was it a werewolf? There's plenty of suspects, all with secrets to hide--the handsome new teacher (Carl Schell), the suave headmaster (Curt Lowens), and the creepy caretaker (Luciano Pigozzi, aka Alan Collins, the "Italian Peter Lorre").

There's also a bevy of young beauties on display, even though the movie doesn't take full advantage of this. The lead female, played by Barbara Lass, takes it upon herself to find out what is going on, which makes her the prime potential victim.

The film's werewolf sports a rather effective makeup, and the increased visual detail on this Blu-ray allows one to get a greater appreciation of it. Director Paolo Heusch (billed as "Richard Benson") presents plenty of atmospheric nighttime sequences, and the original story comes from Eurocult veteran Ernesto Gastaldi.

On the back of this disc cover it is claimed that this transfer of the movie comes from a 2K scan of elements discovered in a Rome lab vault. It is a very good transfer, in anamorphic 1.66:1 screen ratio, and it's much better than the several public domain and YouTube versions of the movie. Two soundtracks are provided: English and Italian (with English subtitles). For some reason the Italian track has a much bolder sound than the English one. The uncut version of the film is presented on this disc, under the title LYCNATHROPUS, with Italian main credits.

Severin has loaded this release with extras, including the U.S. main titles, which includes a snippet of the novelty song "The Ghoul In School". American and Italian trailers are also here, along with a short interview with writer Ernesto Gastaldi, who discusses his work on the story.

This release comes with a CD that contains 30 minutes of the film's original soundtrack music by composer Armando Trovajoli. The spooky score is the perfect thing to play at your next EuroGothic themed party.

The Blu-ray has an audio commentary which was actually recorded for an earlier Retromedia DVD of the film. It features David del Valle with actor Curt Lowens. Lowens enthusiastically discusses his memories of working on the picture, while del Valle keeps wanting to discuss just about everything else. There's also a booklet which reproduces a vintage gallery of stills captioned with lame jokes, in a FAMOUS MONSTERS OF FILMLAND-style manner. The booklet contains a track listing for the soundtrack CD.

It's nice that Severin decided to give the deluxe treatment to a title that has been the subject of way too many mediocre presentations. The soundtrack CD in particular is a quality bonus. WEREWOLF IN A GIRLS' DORMITORY isn't on the Mario Bava level, but's it's a good late-night monster flick.