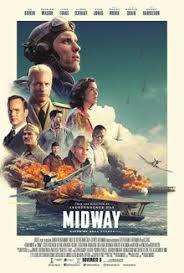 I have to admit that when I first heard about the 2019 film version of MIDWAY, I had serious doubts. Roland Emmerich as the director? Woody Harrelson as Admiral Nimitz? It turns out that the movie is actually a quite accurate and well done interpretation of the events surrounding one of the greatest naval battles of the 20th Century.

This movie's scope goes far beyond the Battle of Midway, which took place in early June, 1942. The script takes into account Pearl Harbor, the Doolittle bombing raid on Tokyo, and the Battle of the Coral Sea. The Japanese side of events is also dramatized in a fair manner, with emphasis on Admiral Yamamoto.

On the American side a number of real military heroes are ably portrayed by an ensemble cast. If there is a leading character it is fighter pilot Dick Best, played by Ed Skrein. The aforementioned Harrelson winds up being effective as Nimitz, with Dennis Quaid as Admiral Halsey and Aaron Eckhart as Jimmy Doolittle. The legendary film director John Ford is even characterized (Ford was on Midway Island when the Japanese attacked, and he was wounded while filming what was going on).

The Battle of Midway is not an easy one to recreate on screen, since the outcome of the entire clash was the result of timing. Emmerich, writer Wes Tooke, and editor Adam Wolfe manage to give the audience enough information so they can understand what is going on, while at the same time present it in a exciting manner that is easy to follow. A huge amount of CGI is used in the battle scenes, which in this day and age is to be expected. I think for the most part the CGI here worked, but there were a few times when it did feel like watching a video game.

There are some Hollywood-style moments, but they are very few, and there's nothing that I would say pulls you out of movie's time frame. (By the way, this movie has very little in common with the 1976 MIDWAY.) There is also no mythologizing the characters--they are presented as human beings.

The 2019 MIDWAY is fine WWII film with good intentions. I think it can be appreciated by history buffs and those who are not experts on the conflict.
Posted by Dan Day, Jr. at 2:21 PM