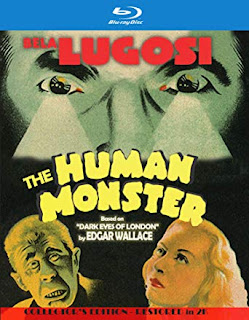 In the spring of 1939, Bela Lugosi was in London, England, starring in a film based on Edgar Wallace's novel DARK EYES OF LONDON. The movie would be released in America by Monogram under the title THE HUMAN MONSTER. The result is one of Bela's best showcases. The movie has long been one of the most common public domain titles on home video, and now it gets an official Blu-ray release courtesy of VCI Entertainment.

DARK EYES OF LONDON/THE HUMAN MONSTER is actually more of a crime thriller than a true horror film, with Bela as the sinister mastermind of a murderous insurance scheme. He plays Dr. Orloff, who, while not orchestrating the killing of unfortunate souls and collecting on their life insurance policies, poses as the kindly director of a home for the blind. In this guise as Dr. Dearborn, Bela also pretends to be blind, and he's dubbed by a British actor, supposedly to try and make the audience think it is another performer (it's easy to figure out that it's Lugosi, however).

Lugosi is quite vicious in this story, willing to eliminate anyone to get his way and using a hulking, blind disfigured fellow named Jake (Wilfred Walter) to commit murder. DARK EYES OF LONDON was not a big budget film, but it's lavish compared to most of the low-grade product Lugosi was usually associated with. Bela also gets good support from Hugh Williams as the no-nonsense police inspector investigating Orloff's crimes, and Greta Gynt as the lovely female lead.

Director Walter Summers keeps things cracking during the tight 76 minute running time, and the story is a bit brutal for a movie of this period, with torture and drownings part of the menu. Sadly Bela wouldn't get very many chances to have this much to do in a major feature film ever again.

DARK EYES OF LONDON should probably get more credit than it does, but I believe the film has been hurt by all those poor quality public domain copies over the years. When VCI announced they were going to give the movie a Blu-ray release, classic monster fans on the internet expressed hope that it would be a worthy one. The front of the disc cover claims that the film has been "restored in 2K from the 35mm fine grain".

And how does it look? It's an improvement from the public domain copies....but only a very slight one. The image throughout is soft, and the picture looks more gray than black & white. At times dialogue sounds indistinct. It's certainly watchable...but I wouldn't call this a major restoration. The print used on this disc is the American release version of the film, with the title THE HUMAN MONSTER.

VCI has provided many extras, including liner notes by Patrick McCabe, and a extensive poster and photo gallery. Two audio commentaries are provided. One has Lugosi expert Gary D. Rhodes, who starts out by giving info on the movie, but winds up spending a lot of time lecturing about Hollywood double features and the British horror film ban of the 1930s. The other (which I have not listened to) features David del Valle and Phoef Sutton.

DARK EYES OF LONDON/THE HUMAN MONSTER has long needed a decent home video release. VCI's Blu-ray is better than the public domain versions, and they did put some extras on it....but I have the nagging feeling that somewhere there's a much more pristine print of the film that's just waiting to be put out by another company. Lugosi fans will still want to get this, at least for now, simply because it's one of the actor's prime performances.
Posted by Dan Day, Jr. at 1:01 PM