It's Pre-Code time again with the 1932 Warner Bros. feature BIG CITY BLUES. The film stars Joan Blondell as a--you guessed it--struggling chorus girl, and it has elements of other Pre-Codes the actress starred in such as UNION DEPOT and CENTRAL PARK.

Bud Reeves (Eric Linden) is a callow young man from Indiana who decides to go to New York City to change his life. Upon arrival in the Big Apple he meets up with his cousin Gibby (Walter Catlett), a fast-talking con man. Gibby proceeds to hit Bud up for various "loans", and he introduces him to a couple of chorus girls (Joan Blondell and Inez Courtney). Bud becomes immediately smitten with Blondell's character, who is named Vida (can you blame him?). Gibby cajoles Bud into holding a party in the young man's hotel room. The gathering is fueled by bootleg hooch, and things start getting out of hand when two of the guests (played by Humphrey Bogart and Lyle Talbot, of all people) begin to fight each other over a young lady. The lady in question winds up getting killed as a result of the brawl, and all the party goers--including Vida--scram from the room, leaving Bud on his own. The confused boy roams the city, trying to figure out what to do. He winds up reunited with Vida, and he's also the fortunate recipient of one of those contrived classic movie climaxes. 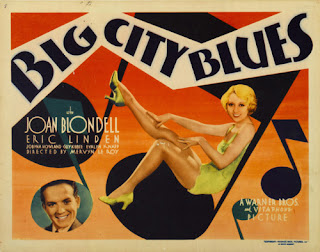 A striking (though deceptive) poster for BIG CITY BLUES

Even though Joan Blondell gets first billing in BIG CITY BLUES, Eric Linden as Bud gets the majority of the screen time. Unfortunately the character of Bud is so naive it's hard to have much sympathy for him. He's a perfect candidate for the Looney Toons gag where someone turns into a giant lollipop with a wrapper marked SUCKER. It's seems hard to believe that Vida, one of those sassy dames with a heart of gold, would fall for the poor sap, but it is to Blondell's credit that she makes it work.

Warner Bros. Pre-Codes were always filled with unique supporting players, and BIG CITY BLUES is no exception. Along with the enthusiastic Walter Catlett, there's Inez Courtney, Guy Kibbee, and Ned Sparks. During a nightclub sequence African-American actor Clarence Muse (WHITE ZOMBIE, INVISIBLE GHOST) gets to sing. Despite the fact that the entire plot hinges on the fight between their two characters, Humphrey Bogart (in one of his earliest film roles) and Lyle Talbot do not even get billing in the credits. Bogart has little screen time, but he's already displaying a cynical persona.

BIG CITY BLUES is only about an hour long, and director Mervyn LeRoy (who cranked out dozens of Warner movies) keeps thing hopping. There really isn't much to the movie--boy goes to the big city, gets into trouble, goes back home sadder but supposedly wiser. It's not a great Pre-Code, but it does have that classic Warner Bros. vibe.
Posted by Dan Day, Jr. at 1:08 PM