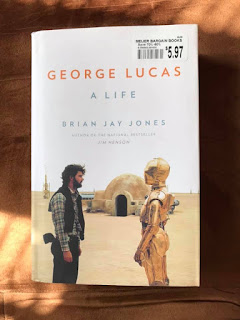 I picked this volume up at a local Meijers at a discount--there's nothing better than getting books cheap.

In high school back in the 1980s I read the first major biography of George Lucas, SKYWALKING, by Dale Pollock. This newer book by Brian Jay Jones is a much more thorough examination of the filmmaker, going up to the release of THE FORCE AWAKENS.

Much of what is in this biography will be familiar to hardcore Star Wars fans, such as the car accident that nearly claimed Lucas' life as he was on the verge of graduating high school, and his battles with studios on films such as THX-1138 and AMERICAN GRAFFITI. What really comes across in this book is Lucas' fiercely independent nature. He was determined to make the movies he wanted to make, and make them his way, with no interference from anyone else--and he succeeded in that goal.

Lucas' independent streak has affected his personal life as well. He maintains his base of operations in Northern California, away from Hollywood, and as an intensely private man, he has no interest in living a glamorous lifestyle. Lucas considers himself an ordinary person, despite the fact he is one of the richest individuals in the world.

Jones examines Lucas' complex relationships with his friends Francis Ford Coppola and Steven Spielberg, and his first wife Marcia (who won an Oscar as co-editor on STAR WARS).

Obviously the Star Wars saga plays a large part in this book, but some of the more intriguing items covered are the Lucasfilm projects that did not make it big, such as HOWARD THE DUCK, RADIOLAND MURDERS, and RED TAILS. Jones suggests that the critical and financial failure of RED TAILS was the impetus for Lucas to sell Lucasfilm to Disney--an act the film mogul may be regretting.

The author writes in a clear, concise, easy-to-read style. He does not go into too much technical or analytical detail about Lucas' movies (one doesn't have to be a major film geek to enjoy this book). Jones makes very clear Lucas' impact on cinema and the entertainment industry, but he also points out that the filmmaker's individualistic attitude has many times caused him problems.

George Lucas has taken a lot of flack over the last 20 years, especially from people like me. But no one can deny his effect on modern-day cinema, or on modern-day culture. For better or worse, George Lucas has had more impact on society than just about any other human being in the last half-century. This book reiterates that, while defining Lucas as real person instead of a mysterious, remote figure. You can say what you want about him, but let's remember that he hired Peter Cushing and Christopher Lee.
Posted by Dan Day, Jr. at 10:41 AM