Amicus Productions is best known as being a rival to Hammer Films in the making of various horror and science-fiction films during the 1960s and 1970s. While Hammer became famous for their English Gothic titles, the British-based Amicus (headed by Americans Max Rosenberg and Milton Subotsky) stuck mainly to fantastic stories in a contemporary setting.

One of Milton Subotsky's favorite films was the 1945 multi-story thriller classic DEAD OF NIGHT. He was so enamored of the movie, it inspired him to make a horror anthology of his own, the 1964 DR. TERROR'S HOUSE OF HORRORS. The result was quite successful, and it set the pattern for six other similar anthologies from Amicus over the next decade.

The following is my ranking of the seven Amicus horror anthology films. The major factor in this list is how the various stories hold up in each individual film. The big problem with any type of anthology film is that there always seems to be one or two stories that are not up to par, or one story winds up being head and shoulders above the others. The Amicus anthologies that, in my opinion, have consistently good stories overall get higher rankings.

Casting plays a small part in this list as well. Since the individual stories in a typical Amicus anthology did not take very long to shoot, the company was able to afford the kind of mainstream actors one wouldn't usually see in these sort of productions. The linking story in each anthology--the one that ties all the stories together--also counts (at times the linking story is more interesting than what is going on in the separate tales).

After Milton Subotsky and Max Rosenberg parted ways, Subotsky was personally involved in two more horror anthologies: THE UNCANNY and THE MONSTER CLUB. These movies are not on this list, since they are not official Amicus films--but if I did rate them, they'd be at the bottom, because they are both terrible.

Here's my list (along with my favorite story for each film)

1. THE HOUSE THAT DRIPPED BLOOD (1970)
Favorite Story: "Sweets to the Sweet"
This is my favorite overall Amicus movie. All four stories (based on tales from Robert Bloch, who wrote the screenplay) are interesting, and director Peter Duffell succeeds in giving the production characterization and depth. "Sweets to the Sweet" is one of the best stories in the entire Amicus anthology series, and while some dislike the humor in the climatic tale, "The Cloak", I think it's rather amusing. This one also has a great cast, with Peter Cushing, Christopher Lee, Jon Pertwee, Ingrid Pitt, and Denholm Elliott.

2. TALES FROM THE CRYPT (1972)
Favorite Story: "Poetic Justice"
Amicus went away from the tales of Robert Bloch in this one and used various stories from the infamous EC comic book. Not all of the five stories are great, but I wouldn't say any of them are terrible. "Blind Alley" is particularly well done, and "Poetic Justice" gives Peter Cushing one of the best roles in his movie career. Director Freddie Francis brings verve and style to the proceedings, and the cast is impressive, with Cushing, Joan Collins, Richard Greene, Patrick Magee....and Sir Ralph Richardson as the Crypt Keeper!

3. DR. TERROR'S HOUSE OF HORRORS (1964)
Favorite Story: "Disembodied Hand"
This one gets extra credit for being the first Amicus anthology. The five stories in this one were all written by Milton Subotsky, and while they are somewhat predictable, director Freddie Francis uses his visual flair to make the most out of them. Peter Cushing is "Dr. Terror", and even though he spends almost his entire time onscreen sitting in a train compartment set, he gives a master class in the art of movie acting. The rest of the cast has plenty of notable names: Christopher Lee, Donald Sutherland, Michael Gough, Bernard Lee, and Francis favorites Katy Wild and Ursula Howells. 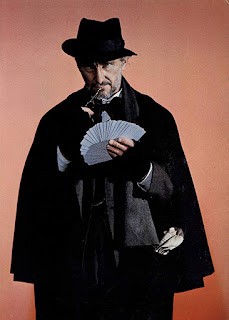 4. FROM BEYOND THE GRAVE (1974)
Favorite Story: "An Act of Kindness"
The last official Amicus anthology, and the most underrated. This time the stories are based on the work of R. Chetwynd-Hayes. Director Kevin Connor gives each tale plenty of atmosphere, particularly "An Act of Kindness", which becomes a study of English lower-class desperation. This story also features magnificently quirky performances by Donald Pleasence and his daughter Angela, and it has quite the twist ending. Peter Cushing shines again as the "Shop Proprietor" in the linking story. Also featuring David Warner, Diana Dors, Margaret Leighton, and Ian Ogilvy.

5. ASYLUM (1972)
Favorite Story: "Mannikins of Horror"
Roy Ward Baker directs this one, with the stories once again coming from Robert Bloch. The stories are okay, but none of them are particularly great. My favorite, "Mannikins of Horror", is directly related to the linking story, which has a young doctor (Robert Powell) applying for a position at a rather strange institution. The cast is better than the material, with Peter Cushing, Richard Todd, Britt Ekland, Charlotte Rampling, Patrick Magee, and Herbert Lom.

6. TORTURE GARDEN (1967)
Favorite Story: "The Man Who Collected Poe"
Freddie Francis returns to direct the second Amicus anthology. Robert Bloch provides the tales, but the only standout is the climatic one, "The Man Who Collected Poe". That story stars Jack Palance and Peter Cushing. Burgess Meredith steals the film as the linking story's "Dr. Diabolo". Other than Palance, Cushing, Meredith, and Michael Ripper, the rest of the cast--and the other stories--are ho-hum.

7. VAULT OF HORROR (1973)
Favorite Story: "Drawn and Quartered"
More tales from EC Comics, but all five of them are mediocre. The reason I picked "Drawn and Quartered" is for its idea that an artist's paintings can influence actual events. What hurts the movie is that every major character is unsympathetic and uninteresting. The cast has some worthy names, such as Tom Baker, Curt Jurgens, Terry-Thomas, and Dawn Addams....but it doesn't have Peter Cushing. This was the only Amicus anthology he did not appear in, which makes one wonder what role he would have played if he had been in it.