TIME OUT FOR RHYTHM 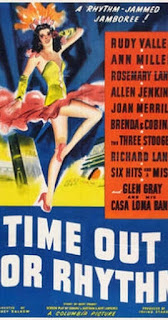 I am a huge fan of the Three Stooges, but until this week I had never seen the 1941 film TIME OUT FOR RHYTHM. This was one of the very few full-length features the Stooges appeared in during their long time working for Columbia Pictures.

I've never understood why the Stooges didn't get more chances to appear in full-length films during their true glory years from the late 30s and early 40s. Was it because Columbia studio head Harry Cohn feared that the boys might become even more popular in that format, and want more money? In all honesty, the Stooges' madcap slapstick style worked best in the short subject size. When the Stooges did appear in a feature in the 1930s and 1940s, it was as a supporting comedy act to the main story.

And that's the function of the Stooges in TIME OUT FOR RHYTHM. They're not even given proper character names, and as you can see on the poster above, they don't get major billing. They pop in and out of the story at various times, trying to get hired as performers by talent agents played by Rudy Vallee and Richard Lane. The main plot revolves around the talent agents, who are partners, and their differences over a difficult singer (Rosemary Lane). Vallee and his associate (played by Allen Jenkins) discover that Lane's maid (Ann Miller) is a talented singer and dancer herself, and various complications ensue before the big show can go on and everyone winds up happy.

The Stooges don't have a lot of screen time in TIME OUT FOR RHYTHM, but they make the most out of their appearances. The boys are particularly rambunctious here, flinging and throwing themselves about with a manic energy. (Were they going out of their way to make an impression since this was a feature film?). In their first segment the Stooges perform the famous "Maharaja" routine. The group would do this act in a later short, THREE LITTLE PIRATES, but by that point Curly's reactions and timing had slowed due to his worsening health. Here Curly is at the height of his powers, and the only thing that hurts the segment is the constant reaction shots of Rudy Vallee and Allen Jenkins laughing at it. The Stooges get their best showcase at the climax, in which they perform a comic rumba, with Curly dressing like Carmen Miranda.

TIME OUT FOR RHYTHM is essentially a B movie--it's only 76 minutes long, and it's in black & white. A number of novelty acts such as Brenda & Cobina and the Six Hits and a Miss are included, but none of the songs are really all that memorable. It doesn't have the budget to be an outstanding musical, and there's nothing notable in the story or Sidney Salkow's direction. The true star of this film is Ann Miller--with her beauty, talent, and charisma, it's as if she's on a higher level than the rest of the cast. (Unfortunately Miller and the Stooges do not interact with one another.)

If it wasn't for Ann Miller and the Three Stooges, TIME OUT FOR RHYTHM would be forgettable. Stooges fans will at least enjoy seeing the boys let loose from one of their typical short subject stories. (For those who do try to watch this, keep an eye out for Stooges supporting actors Eddie Laughton and Bud Jamison in small roles.) It's too bad they weren't given even more to do in it--and it's too bad they weren't given a chance to star in full-length feature films during this period.