FIELD OF DREAMS And The Black Sox Scandal


This week is the 100th anniversary of the 1919 World Series. For those of you who are not baseball fans, the 1919 World Series is one of the most infamous events in American cultural history. During that series, the American League champion Chicago White Sox faced off against the National League champion Cincinnati Reds. The Reds defeated the White Sox, 5 games to 3, but it was discovered that certain players on the Sox had conspired to "throw" the series--that is, to not play their best in exchange for money from gamblers.

Thirty years ago, the film FIELD OF DREAMS was released. It is now considered an American classic. The movie is constantly quoted and referenced on the internet, and the actual baseball field that was built in Iowa for the film has become an iconic site.

The Black Sox scandal has a major part in the plot of FIELD OF DREAMS. The eight White Sox players permanently banned from Major League Baseball due to the circumstances of the scandal "appear" in the film as ghosts, and one of those players, Shoeless Joe Jackson, as portrayed by Ray Liotta, has an important function in the story.

FIELD OF DREAMS is undoubtedly a great film. It's a tale about loss, redemption, hope, and following your heart. It's entertaining and moving, and it's worth seeing just for the baseball park in the cornfield. Writer/Director Phil Alden Robinson (whose script was based on W.P. Kinsella's book SHOELESS JOE) did a magnificent job in creating a modern fairy tale. The scene where James Earl Jones talks about what baseball means to America is one of the greatest movie speeches ever.

A lot of people have a large emotional attachment to FIELD OF DREAMS. That's very understandable. It's all and well to admire the film...I do myself.

Those that do love FIELD OF DREAMS need to understand, however, that it is essentially a fairy tale. It should not be taken as legitimate history on the Black Sox scandal. The reason I point this out is that it seems a lot of people's knowledge of the Black Sox comes strictly from FIELD OF DREAMS or the 1988 movie adaptation of EIGHT MEN OUT.

The entire Black Sox scandal is a very complicated and frustrating affair. All of the people that were heavily involved in it have passed away a long time ago, and historians and researchers are still finding--and refuting--information on it even to this day. We will probably never fully know exactly what happened.

I've been a White Sox fan since I was a little kid. The very title of this blog refers to the 1906 World Champion White Sox, a team that was nicknamed "The Hitless Wonders". I've always been fascinated by White Sox lore--I own dozens of books on the franchise, including all three editions of the White Sox encyclopedia. The most authoritative White Sox historian, author Richard Lindberg, is a Facebook friend of mine.

When I was starting to get interested in baseball history as a kid, the Black Sox--the eight players who were banned from baseball because of what happened in the 1919 World Series--were widely looked down upon. As the years went by, that perception started to change, and it really turned around after EIGHT MEN OUT and FIELD OF DREAMS was released. The Black Sox--and Shoeless Joe Jackson especially--were now looked at by many as wronged men, underpaid working class guys who had been unjustly treated by the "miserly" owner of the White Sox, Charles Comiskey.

FIELD OF DREAMS went out of its way to "rehabilitate" the Black Sox by giving them a chance as movie characters to come out of the cornfield and get a second chance to play the game they supposedly loved. Shoeless Joe is played by Ray Liotta, and he comes off as handsome and noble.

Unfortunately....the real Shoeless Joe looked a bit like a young Harry Dean Stanton, and I doubt he was as articulate as Ray Liotta. The real Shoeless Joe also batted left and threw right, whereas in the movie Ray Liotta bats right and throws left. (Did Jackson learn how to switch hit and throw in heaven??). The Shoeless Joe in FIELD OF DREAMS is a metaphor, a symbol. He truly is a movie character, with very little in common with the historical Shoeless Joe.

The problem is, most people's knowledge of Shoeless Joe comes from FIELD OF DREAMS, and because of their love for the movie, they're convinced that Joe is a wronged innocent, and they might even think the rest of the Black Sox were really innocent too. You really shouldn't base a historical judgement on a movie that features ghosts. 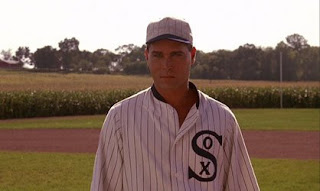 
We live in a sound bite era, where the mainstream media finds it very easy to brand someone as a hero or a villain. Automatically accepting whatever narrative the media decides to give you is not the best idea. The Black Sox scandal is far too complicated for a sound bite, or even a feature length film. (A multi-part mini-series would be the best way to approach it.)

Whenever someone asks me about the Black Sox scandal, I ask them, "What books have you read on the subject?" Invariably the response I get is something along the lines of "I haven't read any books on it...but I love FIELD OF DREAMS!!" If you want to know some actual facts concerning the Black Sox scandal, I suggest you go seek out the several volumes that have been written on it...and yes, I'm referring to reading books--not "stuff on the internet." Books are those things where you have to think and pay attention and turn the pages.

FIELD OF DREAMS is a great film, an American classic....but it should not be used as a primer on the Black Sox scandal.


*If you are interested in my thought on EIGHT MEN OUT, I wrote a post on it for this blog in February of 2013.