My birthday was earlier this week, and as a present my great friend Josh Kennedy sent me a DVD of the 2004 version of THE ALAMO. Josh has been trying to get me to see this movie for years.

Josh is a native Texan, which means that the legend of the Alamo has made a huge impression on him. Josh can literally recite any line of dialogue from John Wayne's THE ALAMO at the drop of a hat. Josh loves the Wayne version, but he also realizes that it is a dramatic interpretation of the actual historical events. He's mentioned to me several times how the 2004 THE ALAMO takes a more nuanced and realistic approach to the subject.

The 2004 THE ALAMO does go for a more "warts and all" approach. The three main characters are still Davy Crockett (Billy Bob Thornton), Jim Bowie (Jason Patric), and William Travis (Patrick Wilson), but the script (co-written by director John Lee Hancock) takes great pains to try and cover various angles of the tale. Mexican General Santa Anna is a minor character in the film, and it is shown that native-born Mexicans fought alongside Travis and his men. The Mexican soldiers are not portrayed as just faceless villains, and the defenders of the Alamo are not set up as pure & noble heroes. The physical realization of the Alamo compound is much more accurate than the John Wayne version, and the costumes are more realistic than the typical generic "Hollywood Western" look.

The movie also tries to set up the events that led up to the siege of the Alamo in 1836, with infighting between Sam Houston (Dennis Quaid) and the leaders of the Texas independent movement. There's also plenty of tension between Travis and Jim Bowie, but it is portrayed in a much less florid manner than in the Wayne version.

John Wayne's Davy Crockett was a larger-than-life figure (with the Duke playing him, what else could he be?). Billy Bob Thornton's Crockett is a man almost haunted by his fame--he feels that he may not be able to live up to his reputation. Thornton's Crockett literally does more fiddling than fighting, and he also gets most of the script's best lines (such as "We're gonna need more men"). Patrick Wilson's Travis is set up as a lightweight as a counterpoint to Jason Patric's brooding Jim Bowie, who spends most of the time sick in bed (just as he really did during his time at the Alamo.) What is missing in this film are the many classic Hollywood character actors that enlivened so many other historical cinematic epics. 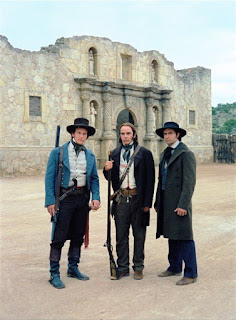 
The actor that made the biggest impression on me was Dennis Quaid as Sam Houston. This may be due to the end of the film, which shows what happened after the slaughter of the Alamo defenders. The movie does not climax with the ending of the siege of the Alamo, as one might expect. It goes on to show how Sam Houston led his ragtag army to victory against the Mexican forces of Santa Anna at the battle of San Jacinto. That victory guaranteed Texas independence, and it is a subject that is worthy of a entire film itself. In fact the San Jacinto sequence feels somewhat like an extended trailer for a sequel to THE ALAMO. I happen to think it's an excellent sequence, and I'm sure it was included to make the ending of the film less of a downer.

The 2004 THE ALAMO is a very good film, but it is also a very somber one, with almost no humor (there's no John Wayne-John Ford style rough housing here). It's not nearly as long as the John Wayne THE ALAMO, but there are times when it feels longer. Director John Lee Hancock is a Texan, and one can tell he tried to cover all the bases when it came to the facts behind the Alamo. Hancock avoids the contrived moments that one expects from an historical epic. He stays away from using CGI or outlandish editing techniques during the battle scenes. Hancock also doesn't use wild camera movements--instead he takes advantage of Dean Semler's atmospheric cinematography. The co-producer of the film was Ron Howard, and the movie does have some of the dramatic style one sees in a Ron Howard-directed title.

I liked the 2004 THE ALAMO. I appreciated the idea of making a film that takes a more measured and realistic approach toward the Alamo story. It's not a grand spectacular epic, but then again that wasn't the approach that the filmmakers decided to take. It's a film that history buffs will especially enjoy.