RINGO AND HIS GOLDEN PISTOL

A couple days ago TCM aired the 1966 Euro Western RINGO AND HIS GOLDEN PISTOL, and I was able to watch it last night through an Xfinity app. The original Italian title of the film is JOHNNY ORO. It was released in American by MGM and presumably re-titled to reference the original Ringo spaghetti westerns, which this movie has nothing in common with.

RINGO AND HIS GOLDEN PISTOL will be of interest to film geeks due to its being directed by Sergio Corbucci, one of the most legendary names associated with the Euro Western genre. The film, however, isn't one of Corbucci's best. It has more of a traditional American Western feel, with a sincere, upright sheriff, Apaches on the warpath, and a saloon girl that serves as a kind-of romantic interest for the main hero.

American actor Mark Damon (best known for his role in Roger Corman's HOUSE OF USHER) stars as the supposed "Ringo", the character known as Johnny Oro in the original version of the film. Ringo is a bounty hunter who works both sides of the Texas-Mexico border. He apparently is obsessed with gold (hence his original moniker). When he claims a reward, he demands gold in return, and his spurs and pistol are made of gold. Much is made of Ringo's unique firearm--one could say that Damon was the Man With the Golden Gun before Christopher Lee. In the movie the gilded weapon does look a bit like a children's toy, but it certainly gets the audience's attention, and from that standpoint it's an effective gimmick. 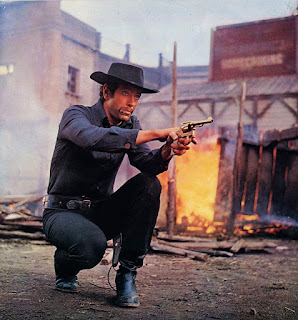 Mark Damon and his Golden Gun

Damon's costume--black shirt, black pants, black hat--makes him greatly resemble Pernell Roberts' Adam Cartwright from BONANZA (the two actors even look somewhat like each other). The main difference is that Damon has a thin mustache and he constantly flashes a Douglas Fairbanks-like grin. Damon's character is also a Mexican, and there's a hint in the story that this is why no one really trusts him. Other than that, the ancestry of the title character doesn't become a major concern. If this film had been made only a year or so later, the Mexican angle would have been an important plot point.

Damon tries to give Ringo/Johnny Oro some cocky self-assurance, but he's basically a good guy at heart--he's nowhere near as greedy or self-absorbed as most Euro Western protagonists. He helps out the heroic sheriff of a Texas border town, and even befriends the sheriff's young son. His relationship with the saloon girl (played by Valeria Fabrizi) is rather chaste, and the climax reveals that Ringo isn't nearly as money hungry as he's made himself out to be. Ringo is also rather talkative--he has more dialogue here than Lee Van Cleef would recite in about three of four of his Euro Westerns combined.

The main plot of RINGO AND HIS GOLDEN PISTOL deals with a group of Mexican bandits with the family name of Perez. Most of them are killed by Ringo for the bounties being offered on them, but he leaves the youngest Perez alive, since he's not wanted for anything. The surviving Perez wants revenge on Ringo, so he gathers up an army of bandits and Apache Indians to attack the town where the bounty hunter is in jail, courtesy of the law-abiding sheriff. Usually the main villains in a spaghetti western are made out to be as outlandish or horrid as possible, but the remaining Perez is a young, clean-cut fellow who has no problem in having other men do his dirty work for him (he doesn't even brandish a weapon until the climax). This Perez is played by Franco De Rosa, an actor handsome enough to have played the lead character. This villain is another intriguing example of how this movie goes against the expected Euro Western elements.

Fans of Sergio Corbucci who haven't seen RINGO AND HIS GOLDEN PISTOL will be surprised by it. It doesn't feature the nihilism and bleakness one expects from Corbucci's work. It also doesn't have several examples of shocking violence (there is a scene where a character gets a tomahawk to the head). There are a number of action sequences, and while they are well-handled, they have a very standard American Western feel to them. (There is a rather explosive climax, however.) The movie certainly isn't boring, but at times it seems to amble along--it doesn't have the narrative drive of other Corbucci films such as DJANGO or THE GREAT SILENCE. The director does try to give the story some visual flair--the print of the film I saw was in widescreen and it looked very good. The music score by Carlo Savina, as expected, is very much influenced by Ennio Morricone. This version of the film was dubbed into English.

Overall, I enjoyed RINGO AND HIS GOLDEN PISTOL. It doesn't rank among the best spaghetti westerns, or even among the best movies directed by Sergio Corbucci, but it's entertaining enough. Those who are usually turned off by the excesses found in most Euro Westerns might appreciate this movie's more traditional feel.