Book Review: THE MAKING OF DUNE 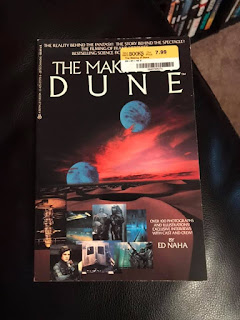 A couple weeks ago I visited my brother Robert in Illinois, and while there we went to a Half-Price Books store. I picked up three titles--one on the Fatty Arbuckle scandal, a Carole Lombard biography, and THE MAKING OF DUNE.

The 1984 version of DUNE, which was directed by David Lynch, is now considered an expensive flop. It does have a few fans now, such as myself, who appreciate how the movie didn't try to mainstream Frank Herbert's complex novel. The film was backed and released by Universal, and the company made a large effort to promote it. A ton of DUNE merchandise was released, including the 300 page book THE MAKING OF DUNE, which was written by Ed Naha.

Many big-budget genre films of the 1980s were the subject of "Making Of" books, or at least "Making Of" special magazines, which were usually published by STARLOG. Ed Naha was a writer for STARLOG, and he was familiar with that magazine's style: giving the reader an inside look at a science-fiction/fantasy movie or TV project without being critical or controversial about it. Today the STARLOG way of covering genre entertainment would never fly--there's no such thing as being non-judgmental on today's social media. One has to remember that back in the 1980s, Geek Culture had not taken over mainstream entertainment yet. If you were a science-fiction or horror movie fan back in the Eighties, the main way you got info on what was going on in those genres was from magazines like STARLOG, FANGORIA, and CINEFANTASTIQUE. Every so often, a show like ENTERTAINMENT TONIGHT might do a short segment on a fantastic film or TV program, but it was usually in a condescending manner.

One also has to remember that the "Making Of" books & magazines for 1980s genre films were made to promote the product. This approach may seem disingenuous now, but if you are a publicist on a film, are you going to let any writer on a set if they work for a publication that trashes movies? A film geek in the 1980s did not have access to instant information on any subject, so whatever news one could get about upcoming genre films was welcome, no matter how biased that info might be.

THE MAKING OF DUNE is obviously meant to highlight the movie, but it's still a worthy read, especially for fans. Naha takes the reader through all aspects of production, and he even covers the extensive special effects work done for the film. The FX is not as extensively analyzed as, say, CINEFEX or CINEFANTASTIQUE would have done it, but the reader gets the general idea of what was involved. Naha's writing style is clear and to the point--this is a book written for the general public, not for hardcore movie enthusiasts. The volume also includes dozens of behind-the-scenes photos.

Naha had access to all the principal people involved in the making of the film, such as David Lynch, producer Raffaella De Laurentiis, and cinematographer Freddie Francis. Naha also interviewed most of the leading actors as well. Nearly everyone Naha talked to gives off a vibe of "This is an amazing project, and it's going to be an amazing movie", but I'm sure that's how Naha wanted to frame it. If one does read between the lines, one does get a sense that those involved in the movie were not too happy with having to film at Churubusco Studios in Mexico City, Mexico. (I don't think the Mexico City Chamber of Commerce was excited about this book.)

David Lynch comes off here as calm and measured, despite the fact that he was writing and directing a massive and highly complicated project. Apparently Lynch won't even discuss DUNE now, but back then he seemed excited about it--at the end of the book he mentions his plans to write and direct DUNE sequels (which of course never came to pass).

The biggest and most welcome surprise in the book is how much Freddie Francis factors into it. Francis is well known for the many British Horror films he directed for companies such as Hammer and Amicus, but that aspect of his career is not delved into here. Instead the reader gets a insightful portrait of Francis as cinematographer. Francis explains to Naha how he believes the cinematographer must do his or her best to bring the director's vision to the screen. He is shown as a confidant and mentor to David Lynch, and someone who has a very dry and knowing sense of humor (Francis seemed bemused at all the various complications involved in the making of DUNE). Francis even stayed in Mexico to take part in the lengthy post-production of special effects, probably due to his loyalty to Lynch.

THE MAKING OF DUNE is definitely skewed toward a positive account of the film's production, but it does present how difficult the shoot was, and how much time, money, and effort was put into it. The movie may have been considered a failure when it was first released, but it wasn't for lack of trying. What really would have been interesting was if Naha had written a book a year later called THE AFTERMATH OF DUNE, detailing how all involved felt about the movie's reception and its final edit. The tone of that book would have been very, very different.

Denis Villeneuve is working on another film adaptation of DUNE, this one scheduled to be released sometime in 2020. Who knows how that one will turn out...but it may cause the David Lynch version to get some attention. I doubt that the 1984 DUNE will ever wind up being looked upon as a classic, but I think it has more positive attributes than many think.

This, however, is not a review of the 1984 DUNE, it's a review of the book on the making of the movie. (If you want me to discuss the actual film in a blog post, let me know through social media.) THE MAKING OF DUNE was obviously published to help sell the film, but it's still an fair and thorough look at what went on during the production. It also reminded me of the days when one went to the local bookstore to find out about what was going on in Geek Culture instead of just clicking on the internet.